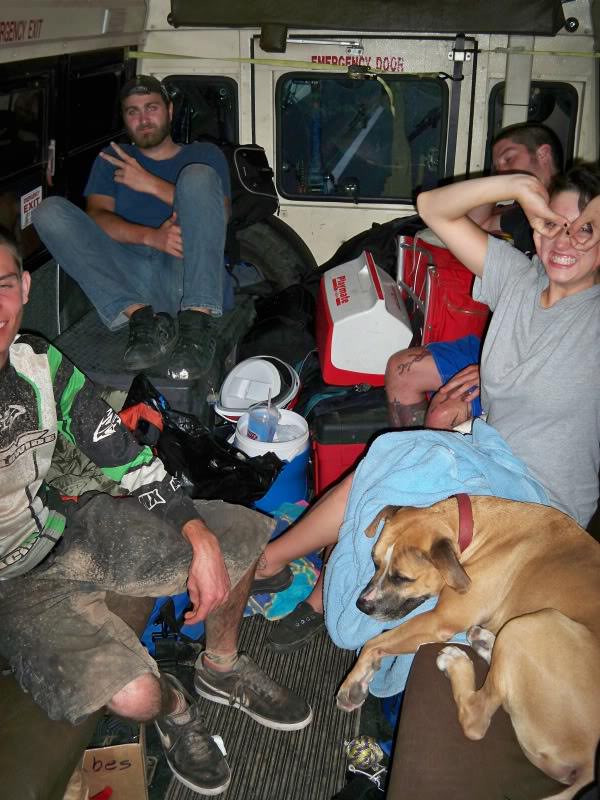 After a great practice weekend, I figured this weekend's race would be almost a breeze, even at the pro/elite level. The only areas that I wasn't allowed to ride prior to race weekend were the two lower road gaps and the "wild zone," a rock garden that ended with a rather magnificent rock drop to steep chute.

On Saturday I took a few practice runs and felt fine on those areas. I knew I'd be a bit slower over the large gap than the rest of the pro field, but figured I could live with that. The rock garden in the lower half of the course was tricky, but not unnavigable. Saturday afternoon, however, everything changed. The rain began in the late afternoon and continued until Sunday morning. Half of our group left after Saturday since the rain showed no signs of letting up and had already soaked through their tent back at the campsite. The rest of us rode out the storm and woke on Sunday morning to a damp, but sunny day.

Immediately the difference in the course was obvious. Areas that were simple before became all-new challenges and the rock garden was especially tough to navigate, since keeping your line was such a battle. After a couple practice runs, though, I felt comfortable and adjusted to the conditions. 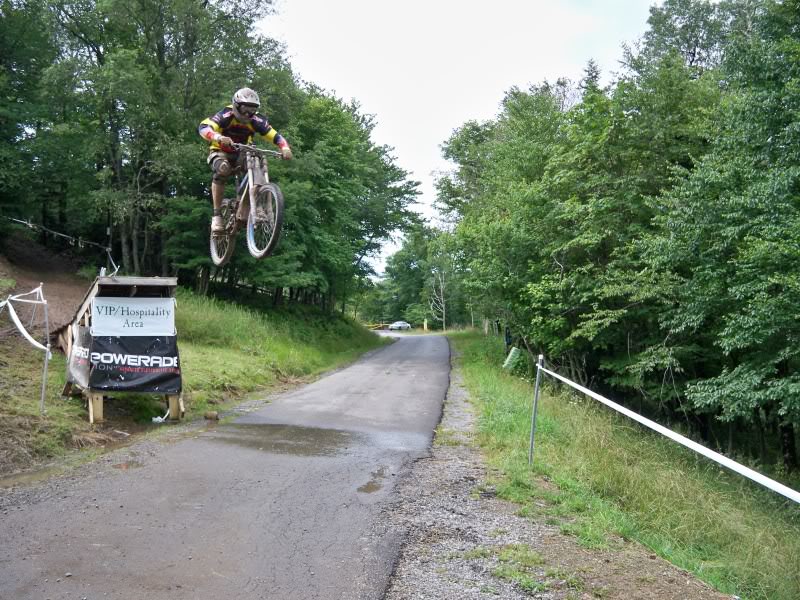 The race run was a bit different. The course had been torn up so badly by the race traffic that the lower half was almost unrecognizable. There was a stream running down the trail just below the "wild zone" and the "hairball" rock garden was more slippery than ever. My run was going fine until just before "hairball" when my rear tire slid out. I paused, ran up the muddy run-in a few feet, and tried to restart the section, which began with a jump off of the first rock. With no time to compose myself and neither pedals clicked in, I didn't last long before going over the bars. Again I tried to relax and restart, but doing so in the middle of a rock garden is extremely tough. A few more falls and one very long breath later, I was over "Roberta's Rock" and almost through "Lower Hairball" when my tires slid out again on the wet rock and ejected me once more.

After so many spills, I figured that my chances of posting a good time were lost, so I decided to take the rest of the course easy and simply go as fast or slow as I felt comfortable. By this time I was near the bottom of the course and through the most challenging sections, so I decided to stay off the brakes and enjoy the speed. There was only one more obstacle in my way, a high-speed, low-elevation, rock drop that lands on the downside of a series of tree roots. It's something that I took slow last race, but had mastered during last week's practice. I felt no fear of the jump, so I decided to hit it hard and fast - big mistake! As soon as my bike left the ground, I could feel that the rear wheel had bounced too hard, and was going to throw me off the front of the bike. I landed face-first on the ground, cutting up the entire left side of my body. Luckily, I had no broken bones and my full-face helmet did its job wonderfully. The race run, however, was a complete bust and I'll be off the bike for at least two weeks. 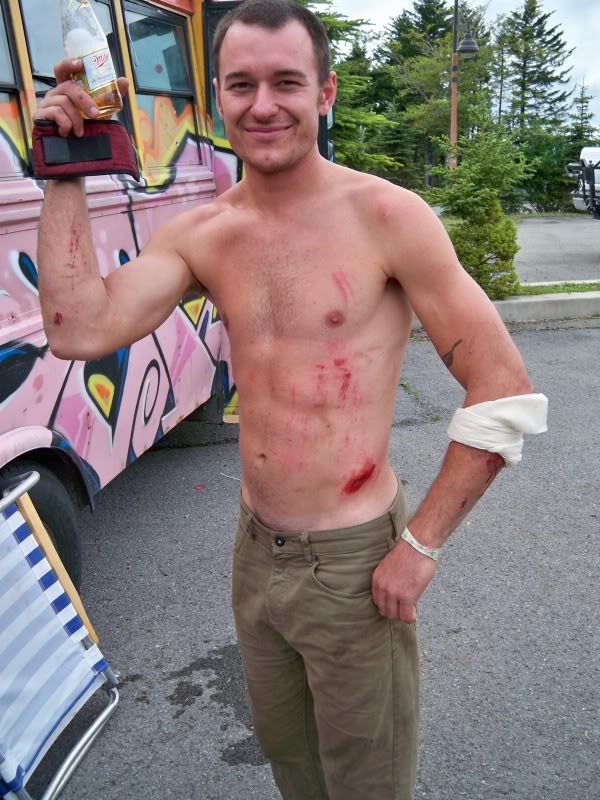 I suppose even wrecks can serve as valuable learning experiences and this one wont soon be forgotten. It was a bummer, but could have been much worse, so I feel lucky coming out of it relatively uninjured. Even with that outcome, it's still nothing to ruin the weekend. Hell, to top it off, we snapped the best group photo I've ever seen on the drive back to Richmond. 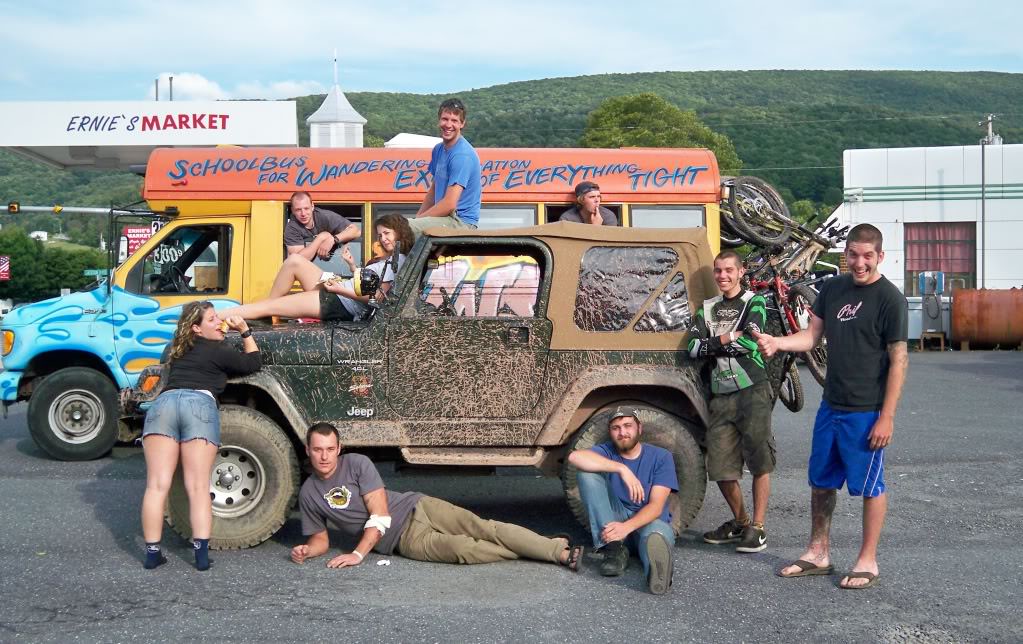 We really lucked out this past weekend. Some of our friends from Industry Nine in Asheville, NC rented a cabin that was perched almost directly under the lift on Snowshoe's Western Territory. It was a great change from our usual tent and campfire style. 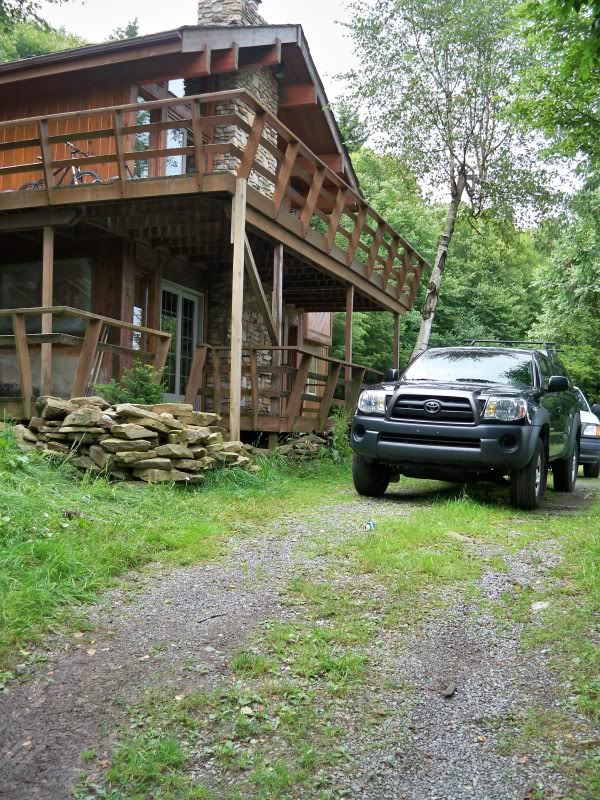 We even had access to a hot tub after a long day of riding. 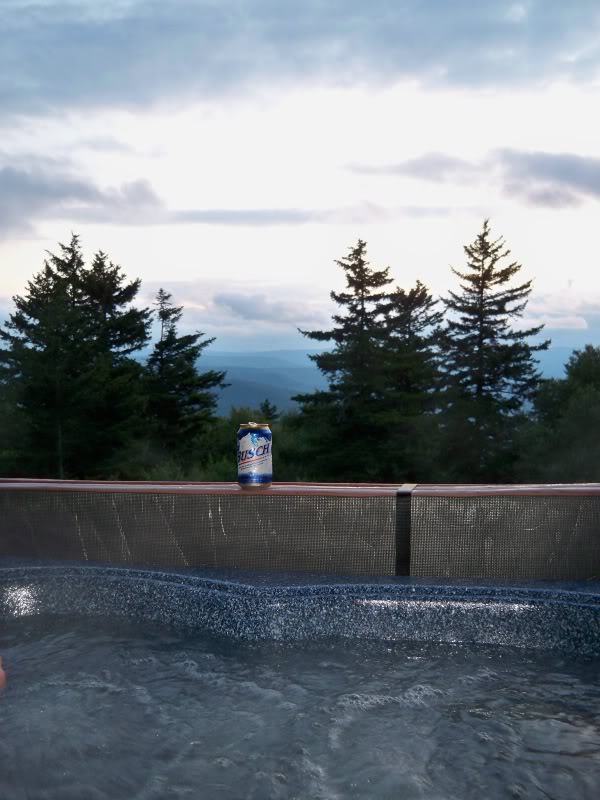 The riding was more relaxed and casual too, and the conditions were perfect. Rain fell on Friday as we drove to the mountains, but it stayed dry for the next two days, giving the trails a tackier, grippy feel.

Most of the locals knew the probable route for next weekend's race, so I was able to preride some of it ahead of time. Next weekend's race will feature three road gaps on the pro course. Only one of them was available to ride this weekend, but I could at least take a sneak peek at the other two. It'll definitely be a great race to watch, with the builders creating the most challenging course they've had in recent years.

Once the riding was over, we all packed up and headed to our respective homes - Asheville, NC and Richmond, VA. It was great seeing some familiar faces and meeting a few more. Once the race season draws to a close, there will definitely be a trip to Asheville to ride and hang with I9 crew. 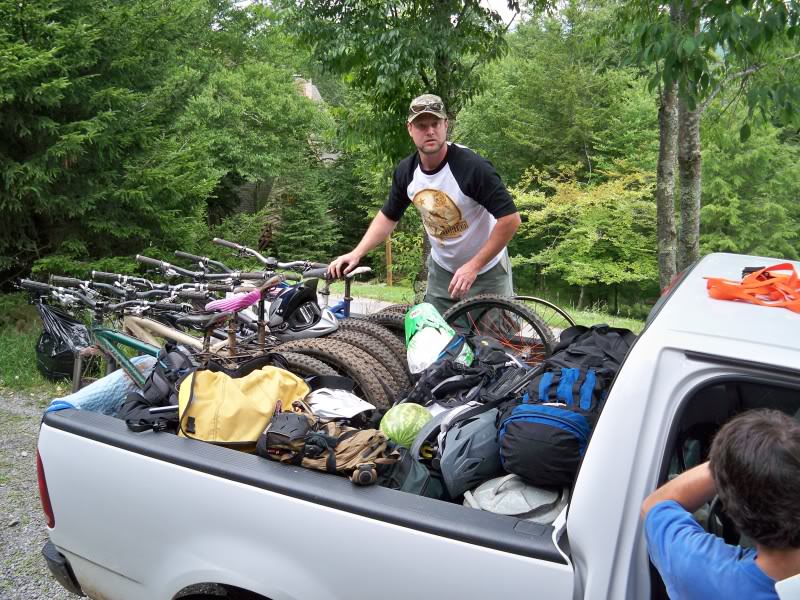 Posted by Dennis Throckmorton at 8:21 AM No comments: 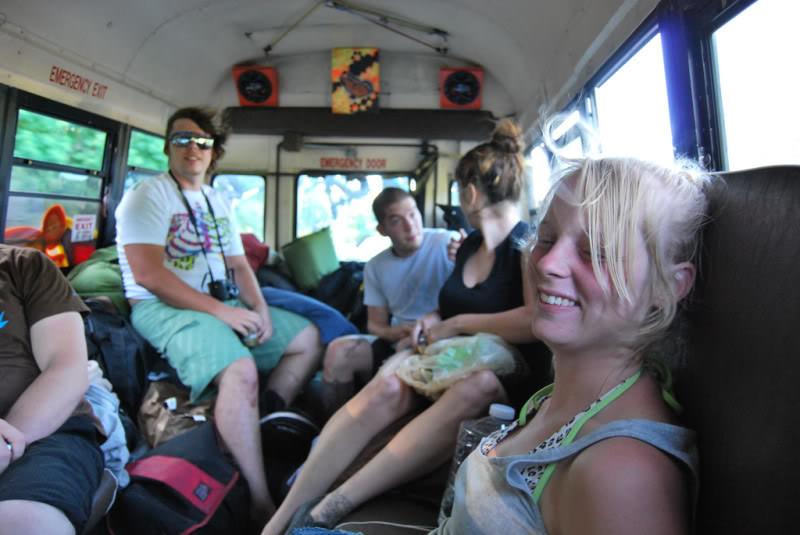 The last trip to Diablo was without the bus. It was a more focused trip I suppose, with no distractions to worry about other than the race itself. It was a great change from the regular weekend expeditions in the bus, but I've been looking forward to returning in the bus ever since then. On this jaunt we had nine people - Rachel, Kaycie, Ashley, Jake, Jake #2, Sean, Nick, Chris, and myself. The ride up took its usual FOREVER, but this time we had plenty of room inside thanks to my recently built bike rack. 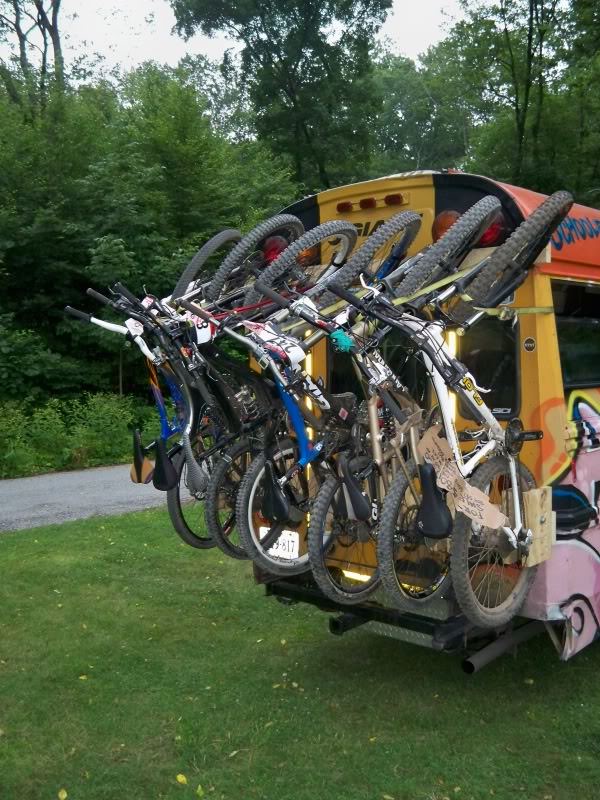 We showed up to the campsite around 3am on Friday night/Saturday morning, pitched some tents, and grabbed a mere three or four hours of sleep before our first day of fun. We rolled into the parking lot the next morning and split off in our two directions - some to the water park and the rest to the bike park.

The race course was tough to say the least. The upper section was only one week old and had little to no traction. The center of the course was new also - although the challenge this time was not limited to a lack of traction. Instead, this was the rock garden. A haphazardly spaced field of boulders, jaggedly pointing in every direction. Finding a line was a real task, and staying on that line was even more of an ordeal. Eventually I did come up with a strategy through the section, but I'm sure it looked like nothing more than a stubborn tear through the center of the garden. Once out of the woods, there was little left of the course. A large step-up followed by a steep left-hand turn that dropped about twenty feet simultaneously. This feature was appropriately named the "crap shoot" since it very often resulted in crashes. I came off the side of the turn once in practice and feel a bit lucky to have survived. After the "crap shoot" the course went through a few tight banks and then spit out into the bottom field. This was where most spectators could watch as riders took their last few turns and flew over a jump before mashing the pedals to the finish line.

After a day of practice we headed back to our campsite to build a fire, cook some burgers and hot dogs, and grab a decent night's sleep. 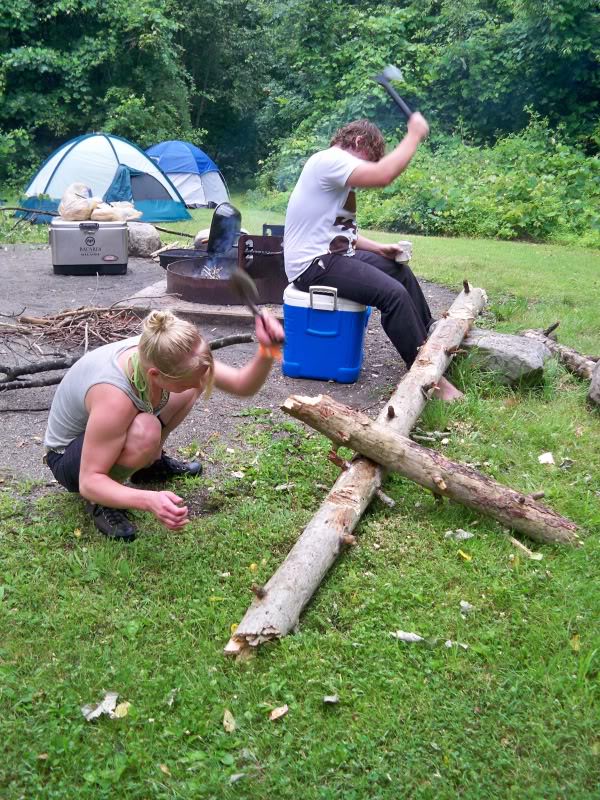 Sunday was race day! Sean had suffered a fall on our last run the previous day, so he decided to volunteer as a course marshal. Nick did the same in order to get two free day passes for our next trip. I took three practice runs while the rest of our group rode the rest of the park. Jake came back to the bus with a bruised leg and had to end his day of riding a bit early. Soon, however, the races began and I headed to the top of the gondola. My run down the hill was quick, but I decided to play it safe when possible since staying on the bike would be faster than a high-speed wreck. I rode about half of the rock garden with one foot on the pedals after barely saving myself from sliding off course. When I popped out of the garden I pushed the pedals as much as possible, sliding into the dry and dusty corners. My tires were slipping on the loose gravel and sand, but it was a feeling I'd become accustomed to in practice, so I just held on until they found some traction. When I passed the finish line the announcer reported my time and position - second place! There were still several riders to go, but my time held firm and I walked away with a great result. 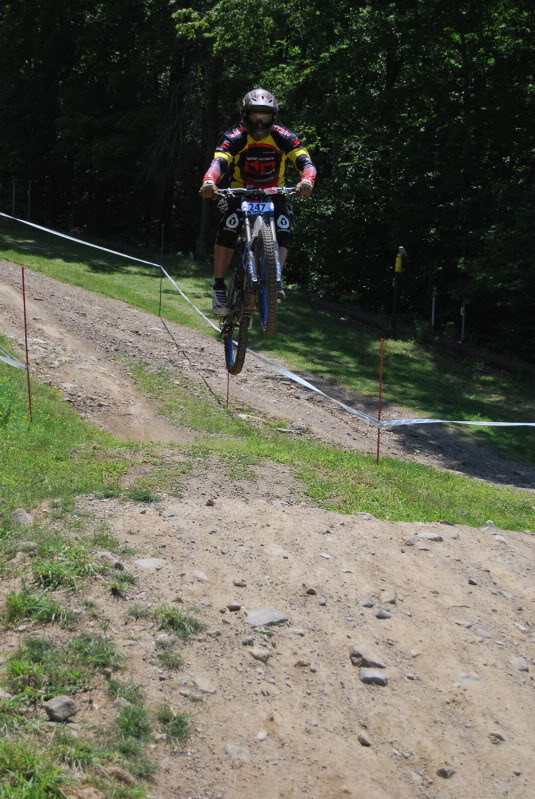 We packed up the bus after the race, Ashley cooked the remainder of our hot dogs and burgers, and we were soon on the road. About an hour past midnight we pulled into the Rowlett's parking lot, tired and satisfied - looking forward to next weekend's adventure. 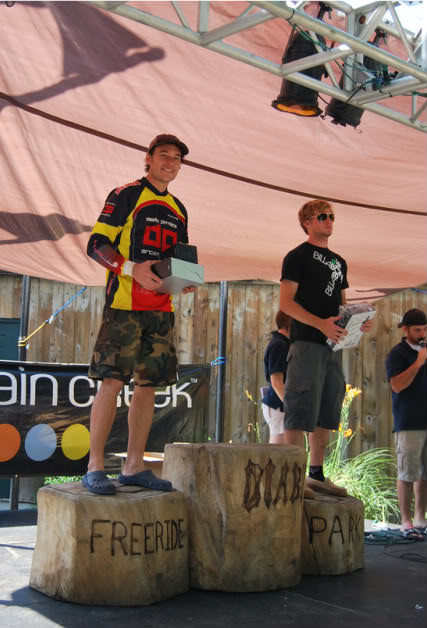