With only a week to go before the Shenandoah 100 it's time I ditched the gravity bike and got on my XC ride. Well, sorta... 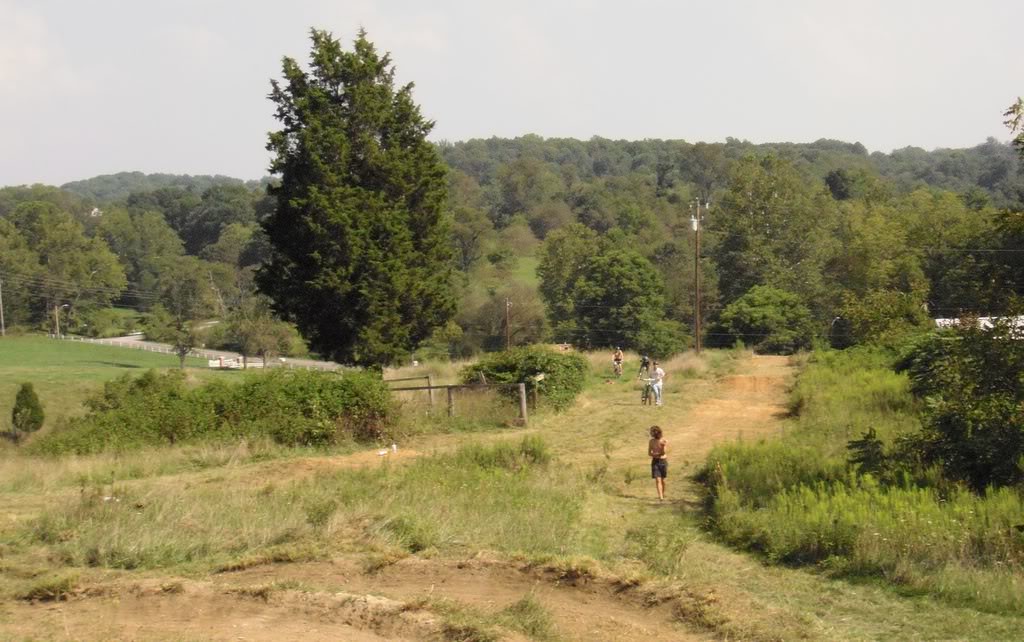 On Friday night Joey, Taylor, and I drove to David Verde's house in Blacksburg, VA. The next morning we woke to pancakes and gnar-e-o's! On the schedule for that day was shuttle runs on Brush Mountain. We took turns driving shuttle and cruising down the sweet singletrack. Taylor was on a borrowed Anthem X1 (for the first mtb trip of his life) but kept up with us just fine. We got three or four runs each and capped off the day with a trail that led straight to the VT Freeride Farm. There we spent the remainder of the day making trips down their newly built dual-slalom course. 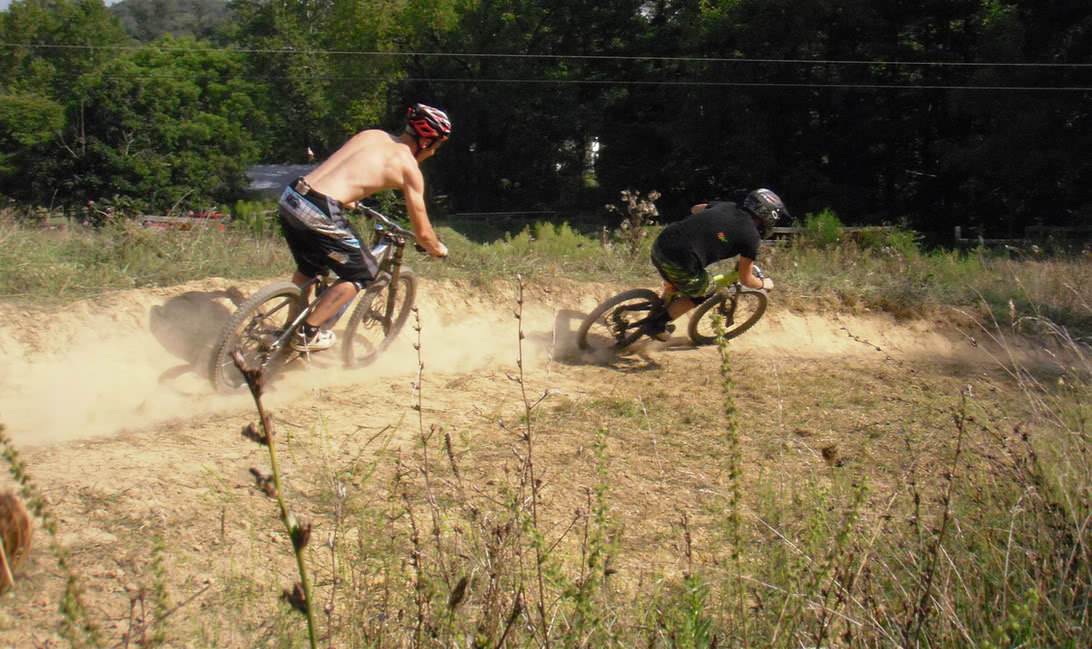 That night we headed to our favorite camping spot near Slatyfork, West VA. Here's the view from my hammock: 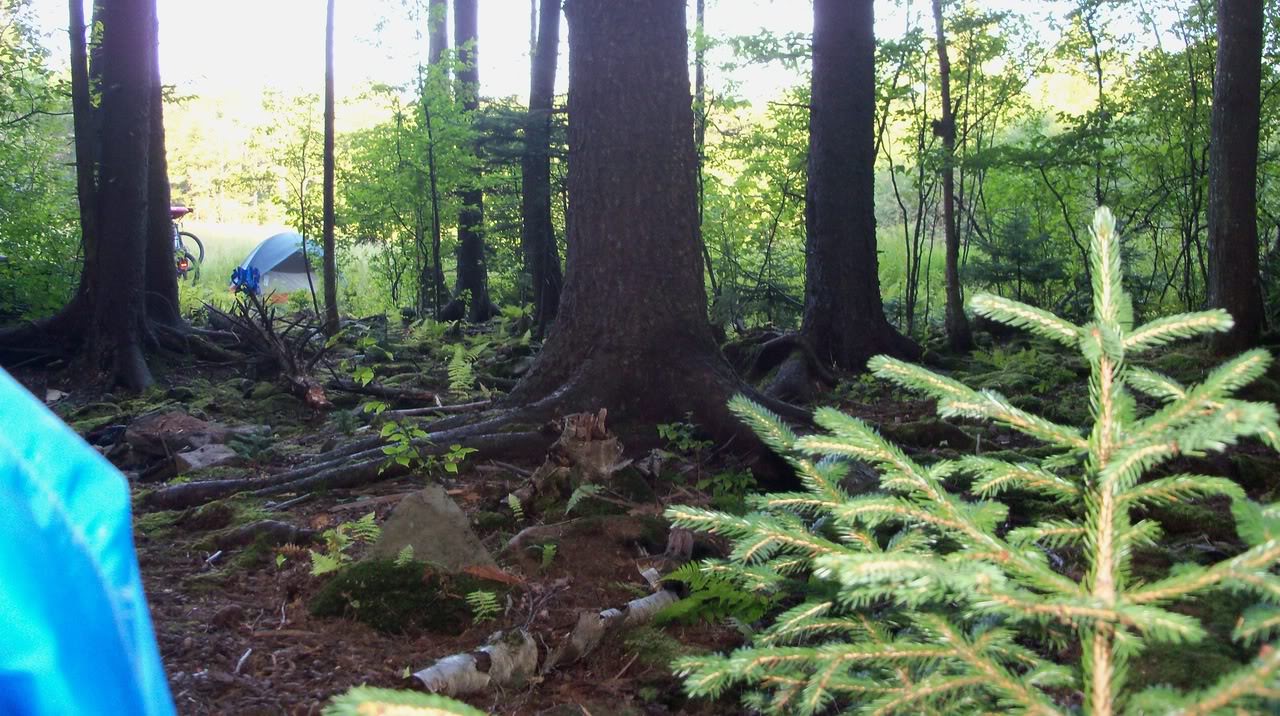 The next morning we split into two groups. We met Jarrod and Joe at the summit so they joined Joey and David for lift-accessed riding at Snowshoe while Taylor and I headed out for a XC loop around the mountain. The ride was great despite missing one of the turnoffs and instead completing the loop on fireroad. My favorite trail of the day was 600 steps. It's a medium pace with lots of fun technical features to snake through. The coolest obstacles of all were the tree stumps cut six to seven inches from the ground. They've been in the trail for so long that moss has covered them, along with most of the trail, which gives the illusion that they're simply part of the ground. Another fun spot was the tree-laden mud pit we found:

We also found a cool Jeep Wagoneer built as a "troop carrier" for Snowshoe's Dining staff: 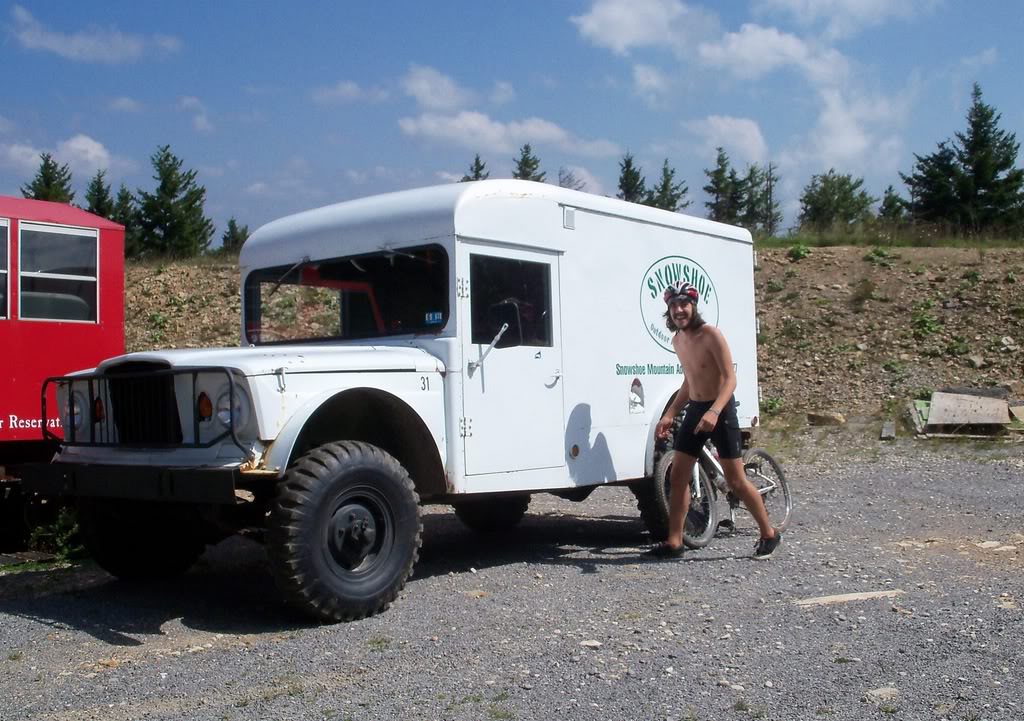 Once our loop was over, Taylor and I lumbered over to the store to replenish our bodies with some much needed carbohydrates - pizza! Soon after that Joey and David arrived back at the Jeep. We said goodbye to our Blacksburg guide, David, and headed back for home.
Posted by Dennis Throckmorton at 7:07 AM 1 comment:

Finally the bus was up and running again this weekend. It was a good thing too, with ten people coming on this trip to North Carolina. 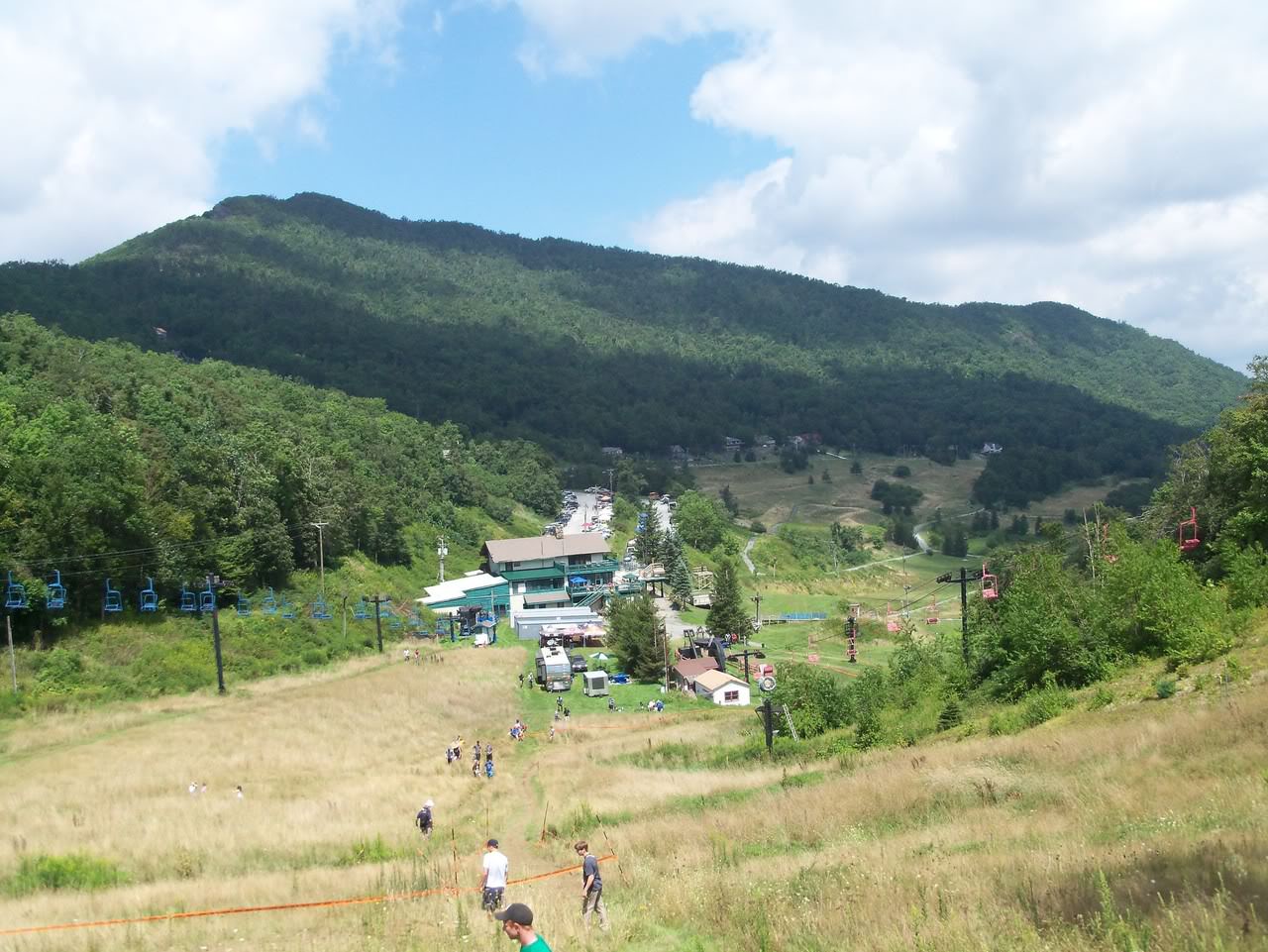 The event this time was the Dirty Bird DH Race near Boone, NC. It's the first time I've been to this event and I was thoroughly impressed with the great job all of the organizers/riders did this weekend. It was a grassroots race on a former ski resort called Hawksnest. The resort remains in business because of their zipline in summer months and tubing park in the winter. The ski lifts, however, are not in use anymore, so the organizers of the event provided shuttles for the riders all weekend long. It was obvious to see that the event was made possible by a lot of personal sacrifice and effort. The trails were cut by hand and even the trail builders are not allowed to ride the course much other than during scheduled events. 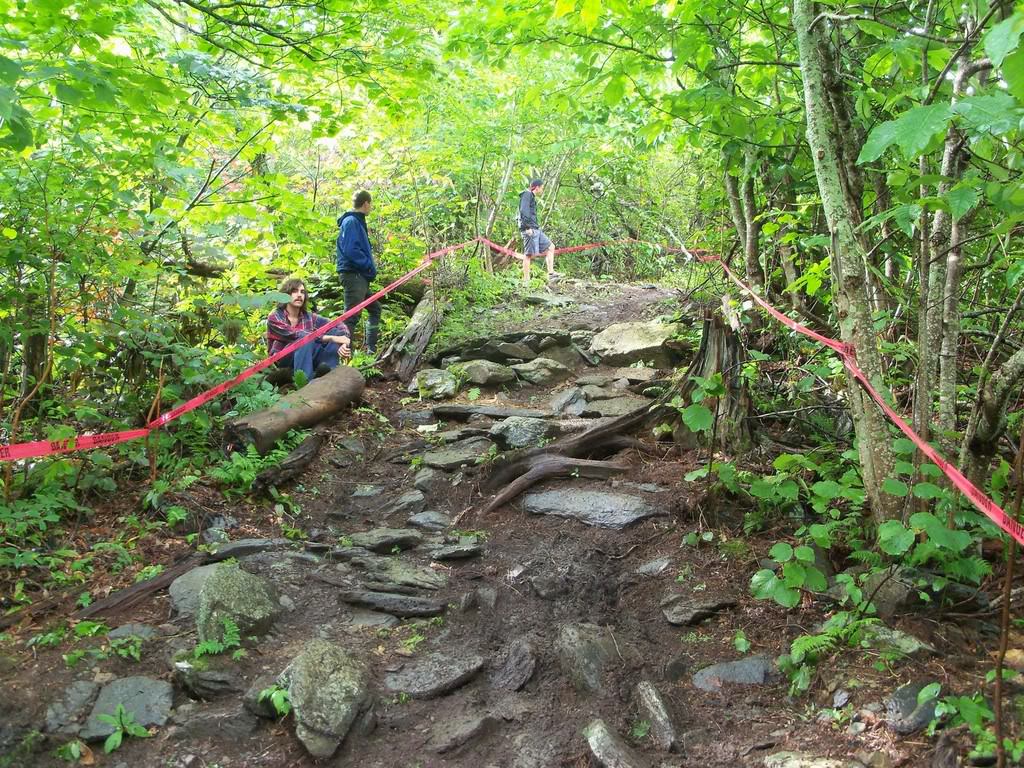 This year they cut two brand new trails for the race. One was designated for the Pro class and the other for Intro/Amateur. I signed up for Pro since I figured that course would be more fun. It was short and sweet - featuring two rock gardens, some very slippery roots, a fast section of slalom-style berms, and three mandatory jumps (two step-downs and a double). The amateur course was no joke either, but the Pro side seemed like a bit more fun. 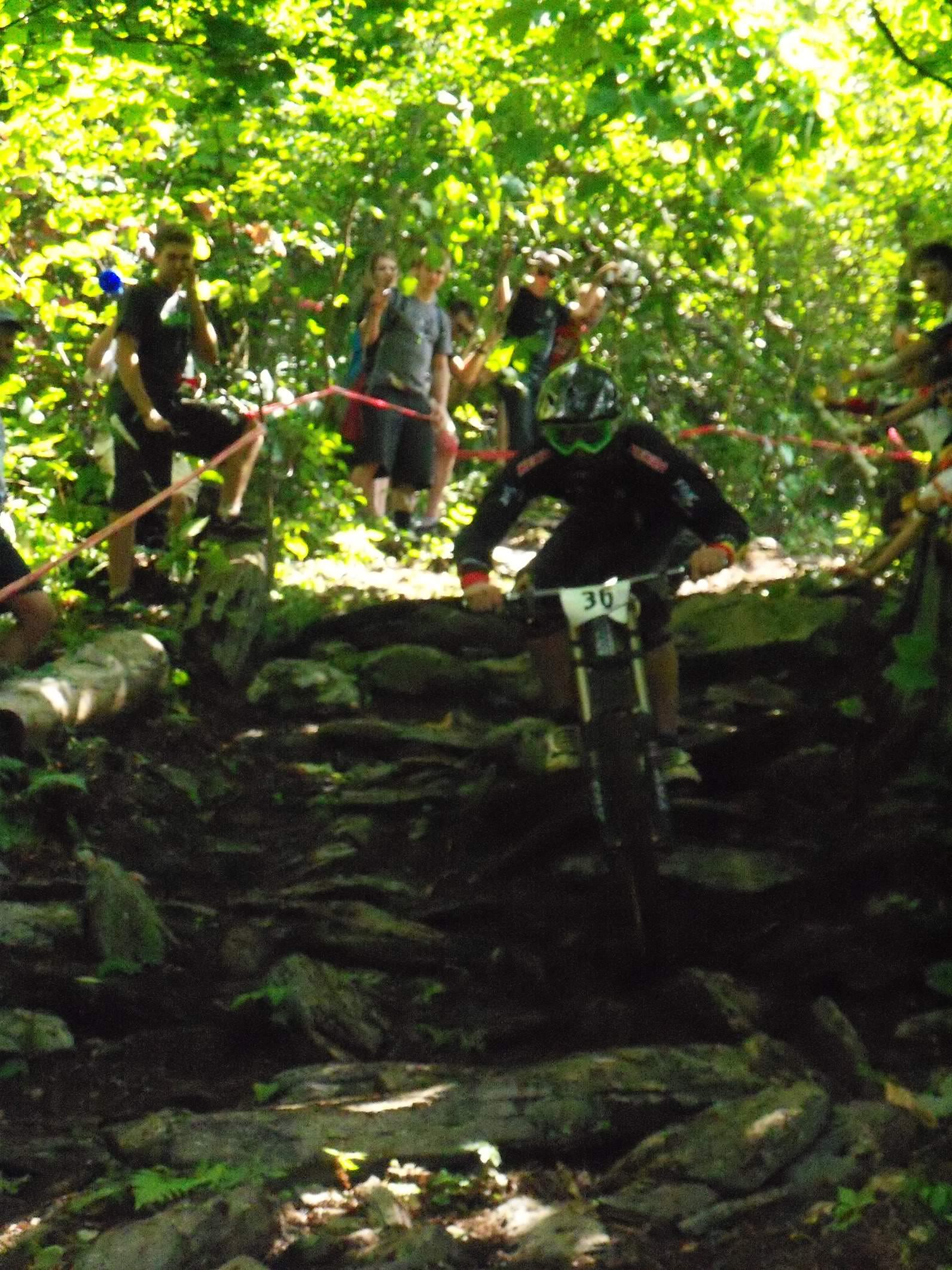 We met Greg Wittwer's brother, James, at the event since he attends Appalachian State University and had a great time hanging out with him at our campsite. Nat and Sean (and I) knew another friend in the area, Katie (aka Squirrel), and she drove to the event to hang out and show Nat and Sean around downtown Boone.

The rain moved in on Saturday afternoon and we hid in the bus until it passed. After that we headed to Boone to eat and buy more supplies (beer & food). We returned to the resort, started a campfire, and relaxed a bit before heading to bed. The next morning we walked to course to inspect its condition and then I got in a couple practice runs before the race began. My race run went well, with no real slip ups despite the muddy conditions. The main rock garden was the favorite spot to spectate, and our group got to see some dicey runs on the slick and bumpy section.

After the race we packed up the bus and headed for a local swimming spot that Katie knew of. It was an excellent way to cap off the weekend and the drive afterwards felt effortless, especially when compared to last week's drive to Vermont. 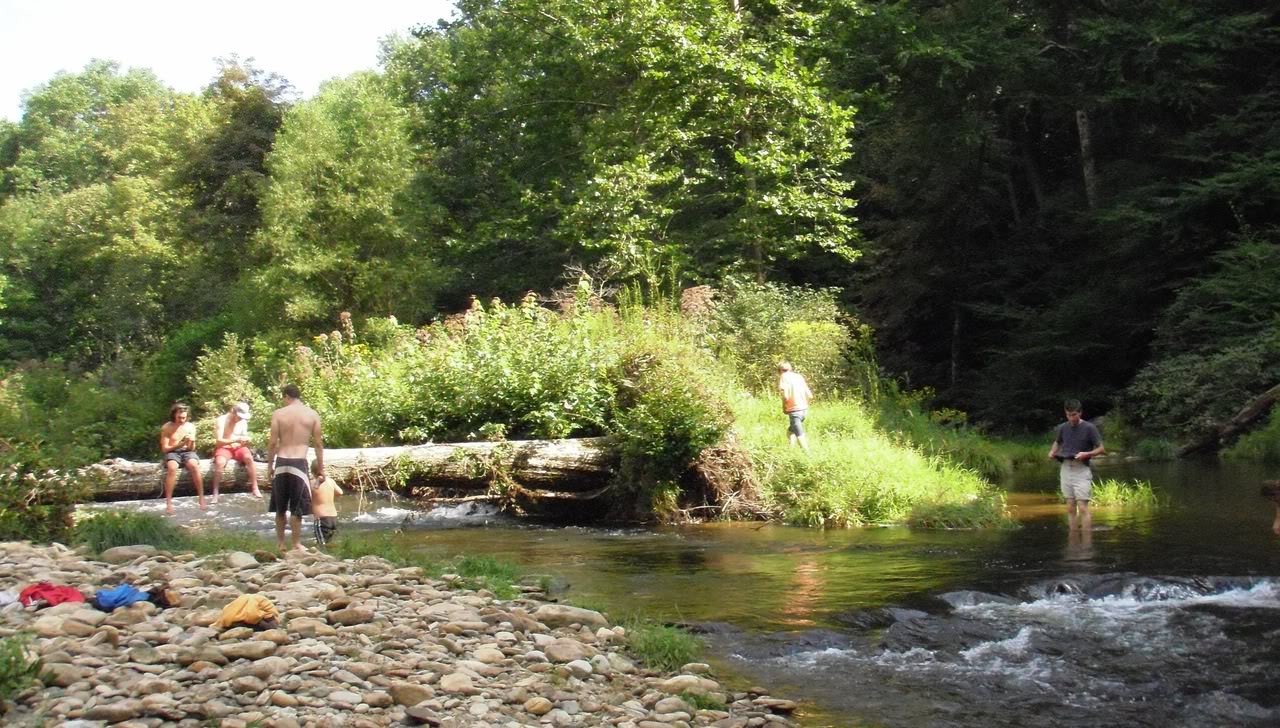 Posted by Dennis Throckmorton at 9:55 AM 2 comments:

For a weekend trip, Vermont is a LONG drive! 25 hours behind the wheel over the course of three days - yikes! Who cares though, it was worth it.

The course at Killington was long too - a 2.2 mile downhill run that traversed the mountain, linking wooded sections with fire road sprints. The wooded areas were extremely technical - slippery roots leading into loose rock gardens and soft, loamy soil. The pros found multiple sneak lines, often straightening two or three turns, allowing them to cut directly through the slowest portions of the track. 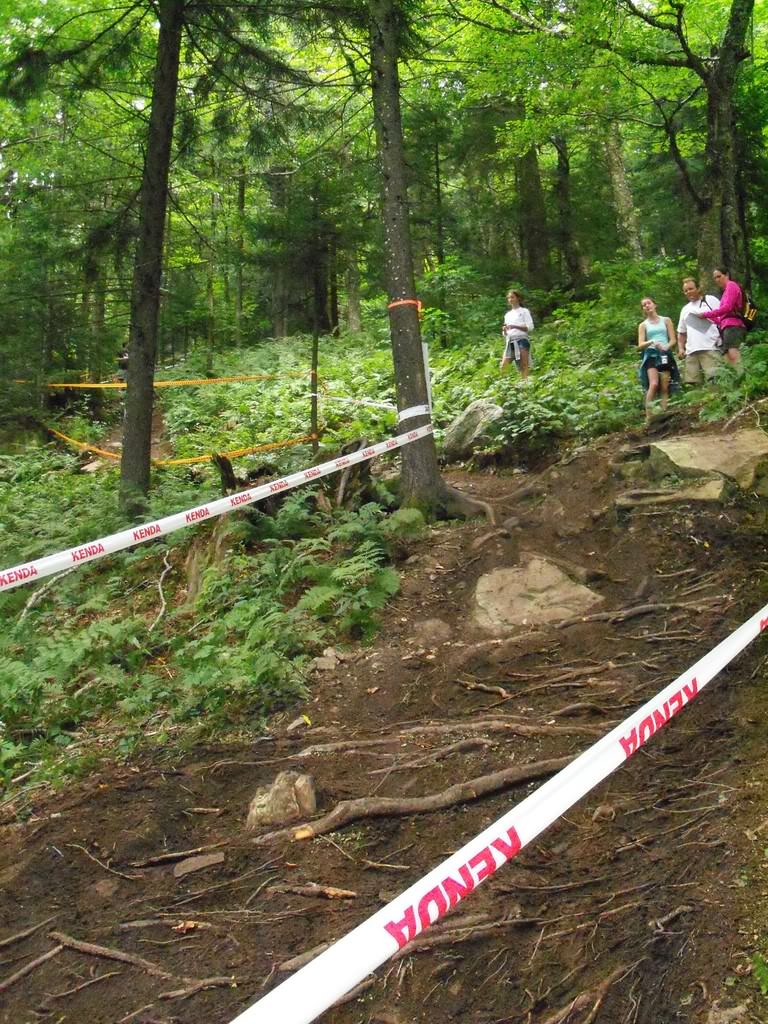 Even with these shortcuts, the fastest time of the day was 6:01:12, posted by Geritt Beytagh - minutes longer than any of the other five courses thus far. My run went well, good enough for 1st place in CAT2, but nearly a minute slower than the pros at 6:58:28. I was exhausted by the time I passed the finish line and amazed that the pros could shed so much time on the course. It's one of the most impressive aspects of racing, seeing the fastest riders achieve what seems to be simply impossible. 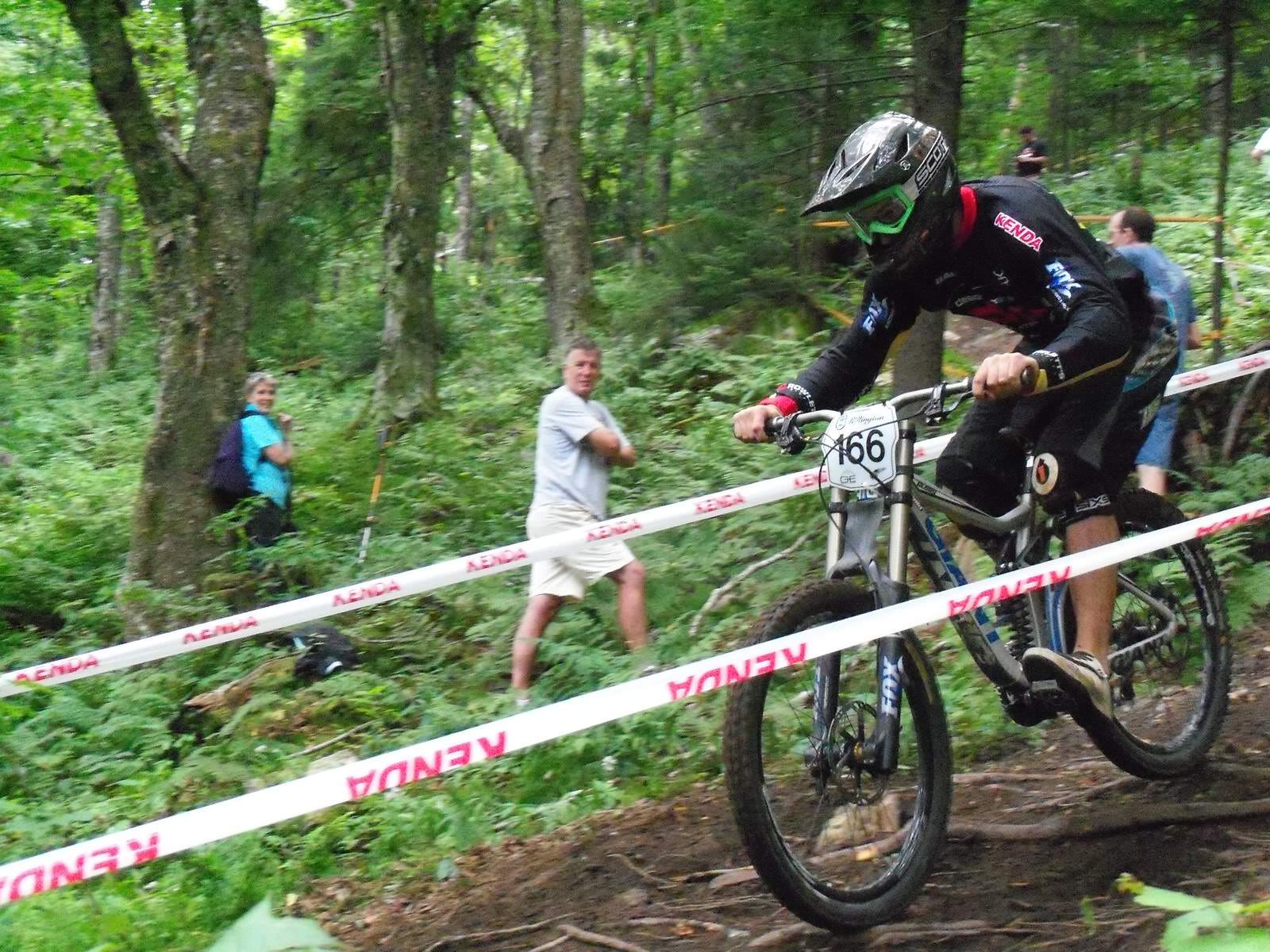 After awards we said goodbye to the friends we'd met over the weekend and buckled up for another long drive home, just under 12 hours, stopping only a handful of times during the 500-plus mile trek. There are only two more races left in the GES, the next of which will be even lengthier than Killington as we head for the endurance downhill of the Whiteface 5K.
Posted by Dennis Throckmorton at 6:31 PM No comments:

With only one month left to prepare for the Shenandoah 100 it's high time we got on some cross-country bikes. The closest, and most grueling ride is the Sherando Lake loop. The last time we were here was a shuttle trip. We made three or four trips DOWN the trail, but never once had to face the dreaded switchbacks of Sherando's climb. This time we began the ride with the ascent, which is a grueling ordeal that leaves you with a wonderful feeling of accomplishment once atop the ridgeline. 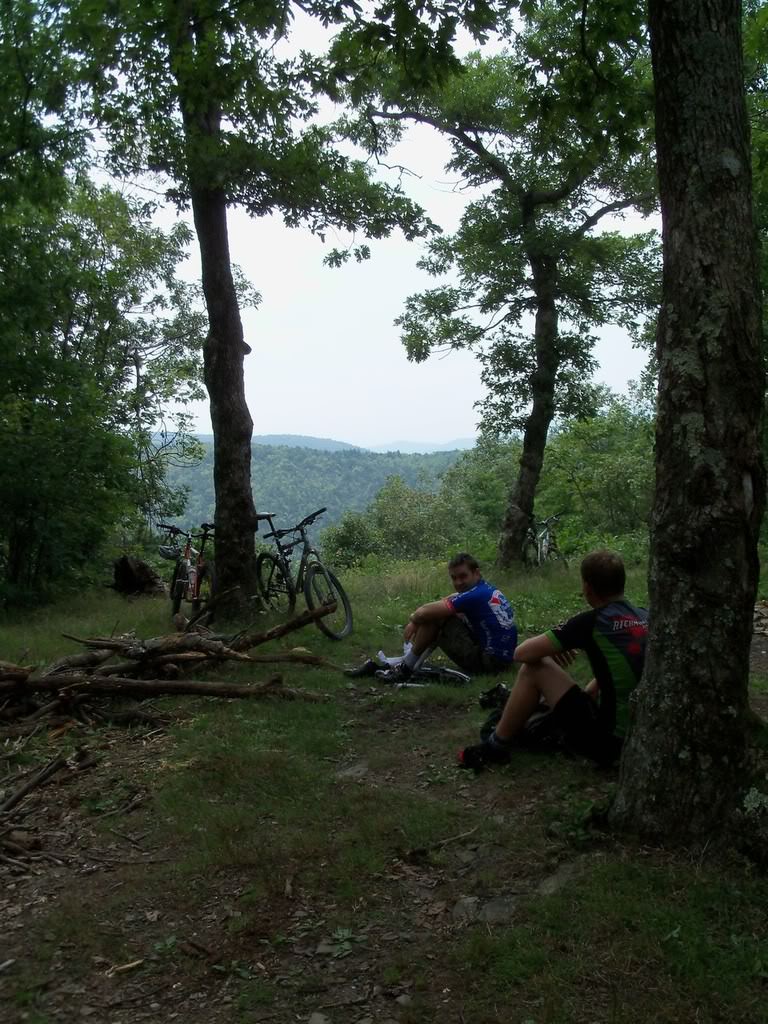 The descent is great too - roughly seven miles of singletrack and rock gardens which spit you out at the upper lake at Sherando. The great part of this trip was that we rejoined the rest of our group at the lower lake and got to take a quick dip in the water once our ride was over. 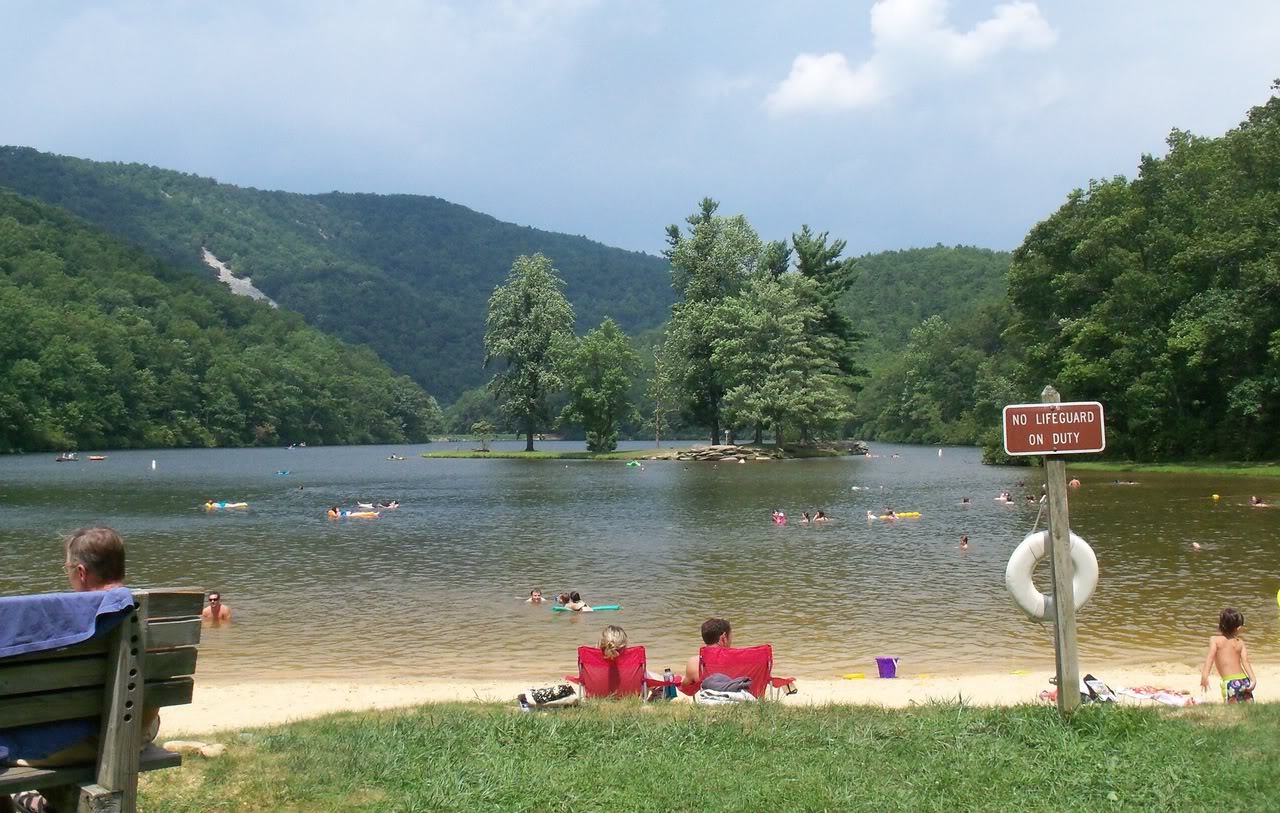 During the drive back we visited a peach farm and stocked up with ripe peaches, which we've been eating for the past few days.
Posted by Dennis Throckmorton at 7:30 PM No comments:

Another great weekend at the Shoe! 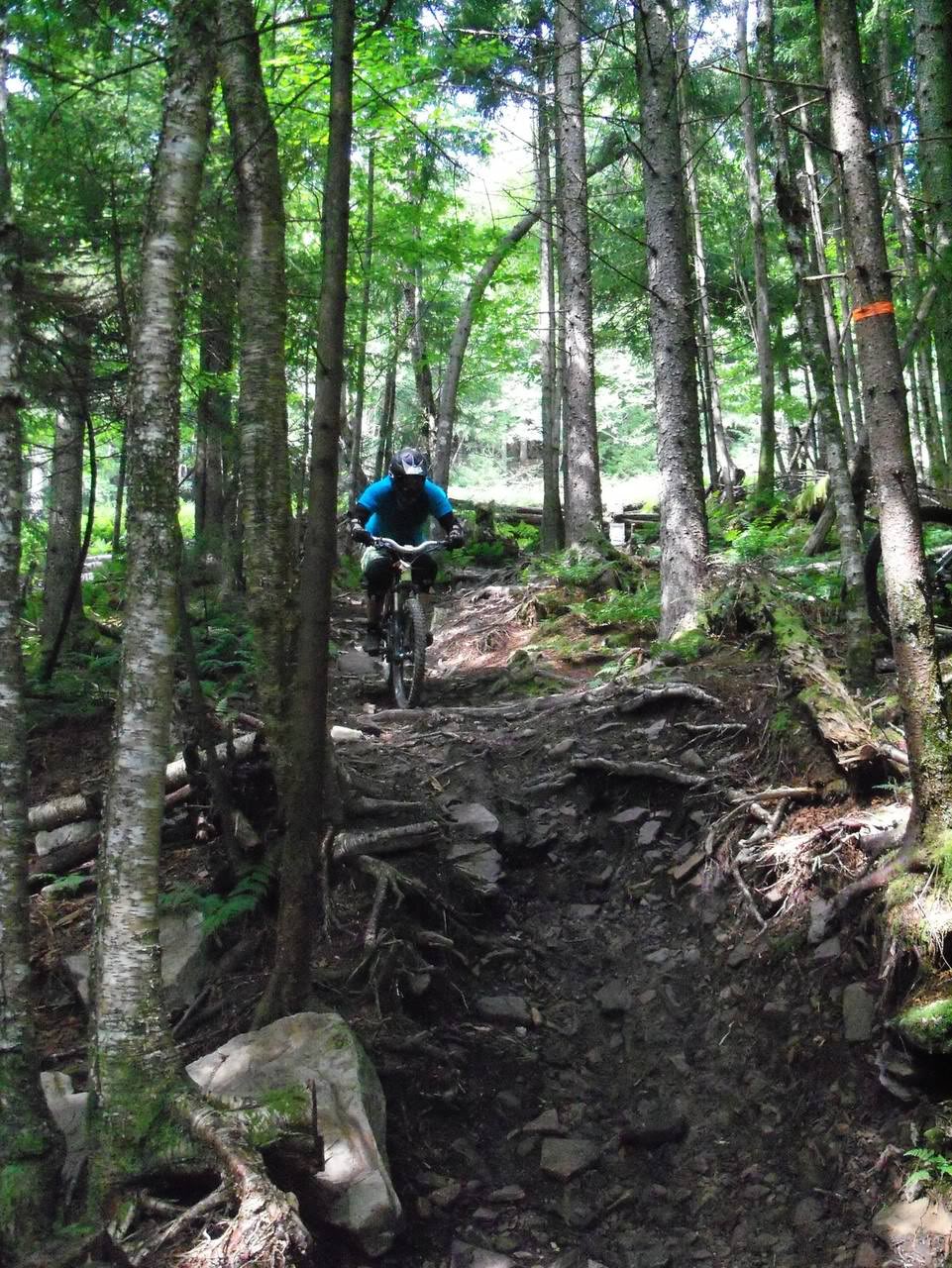 This summer's weather has been phenomenal. A stark contrast to last year's, which only offered two or three weekends without rain. 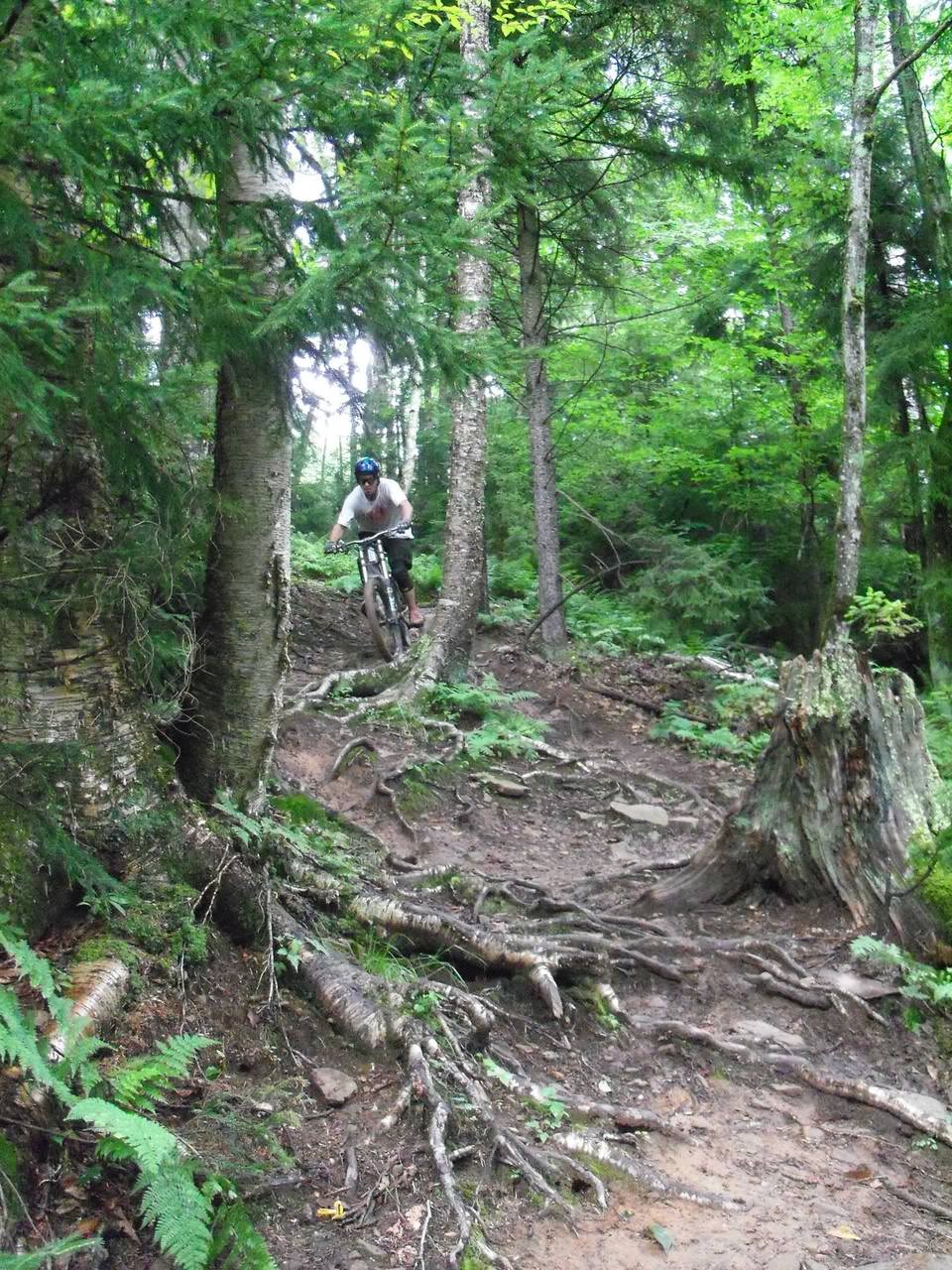 On Sunday I traded bikes with Jake. He spent Saturday bouncing around on his hardtail dirt-jump bike, so I figured I'd give him a break and let him feel the soft 8" suspension on my Glory. He had a great time and so did I, picking my lines carefully around the slippery roots and rocks. 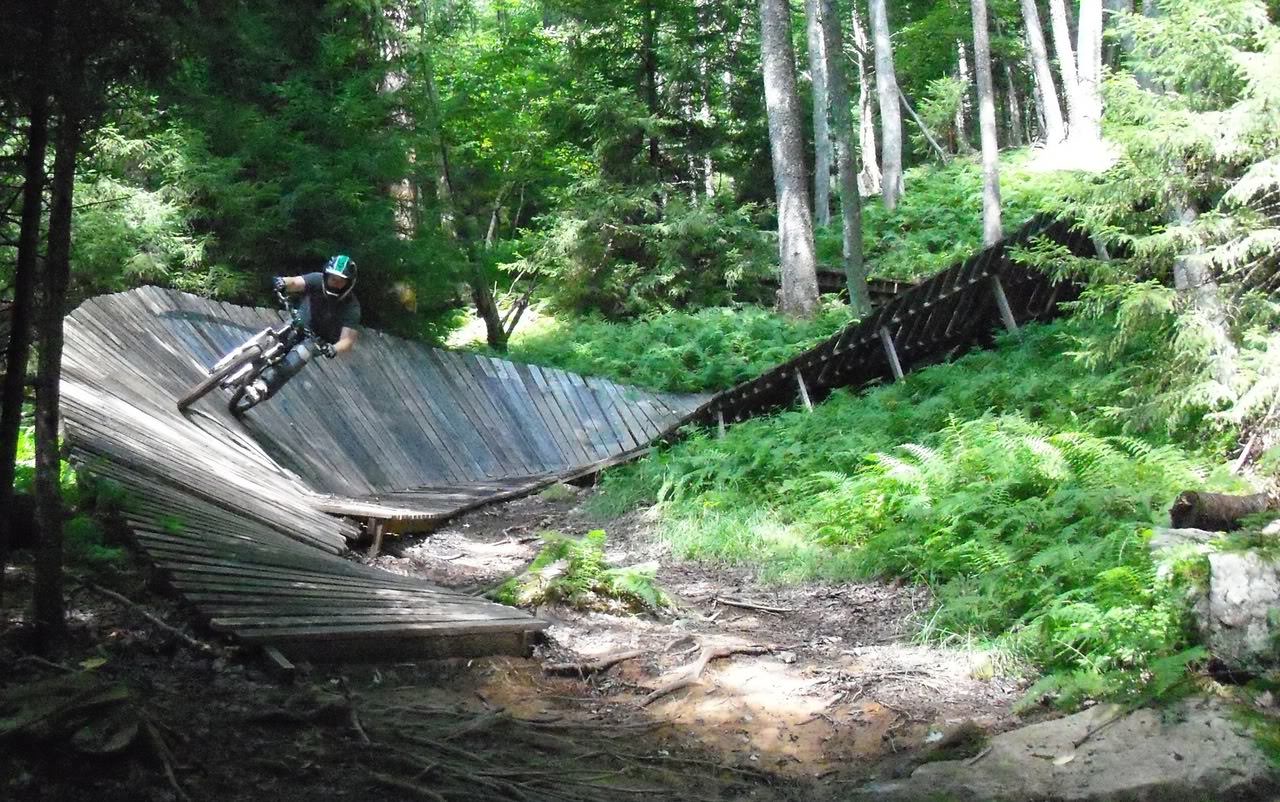 Posted by Dennis Throckmorton at 4:28 PM No comments: