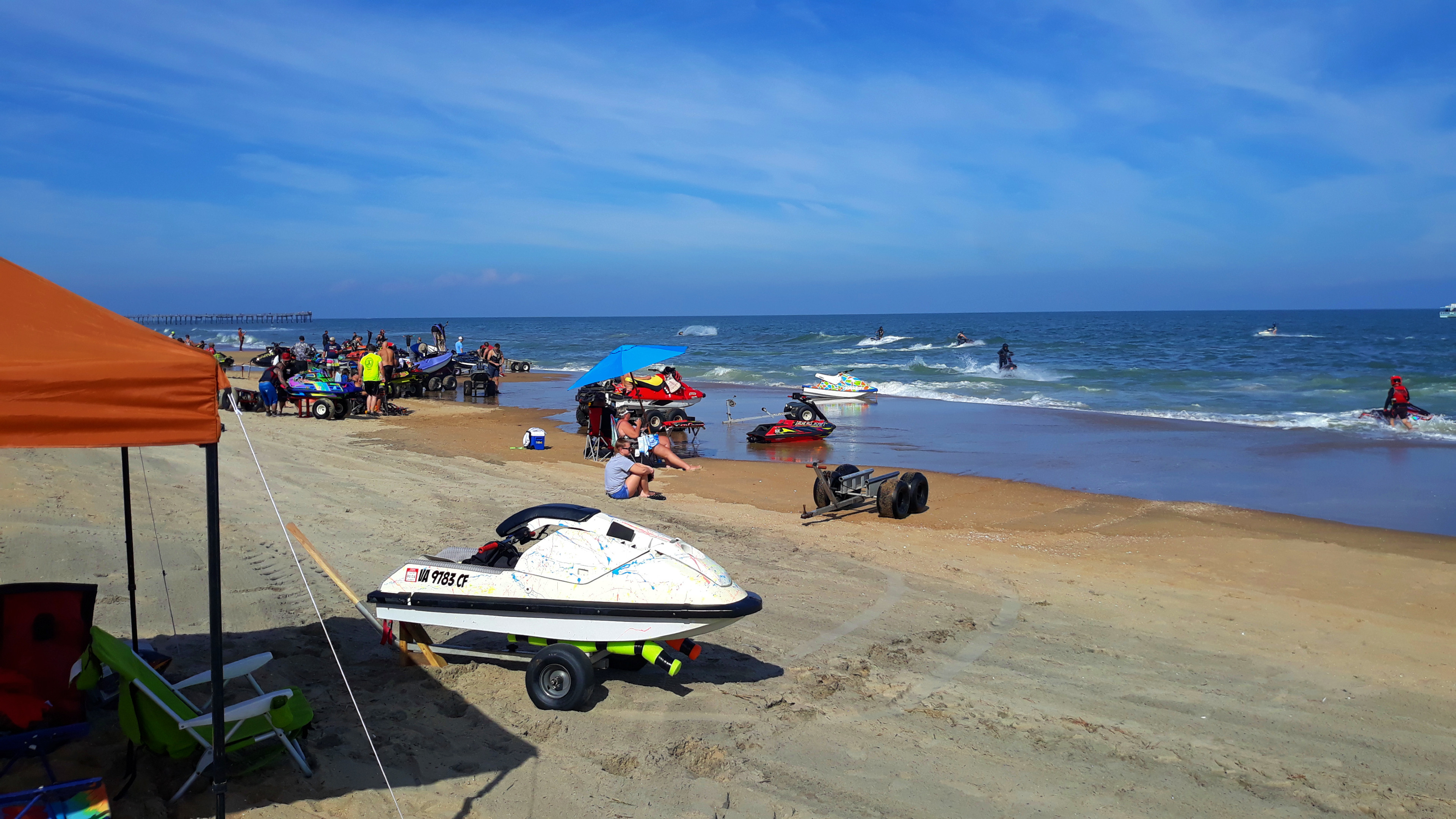 Since our inaugural trip to Wave Daze, I've been preparing my 650sx for another run at the surf of Virginia Beach. 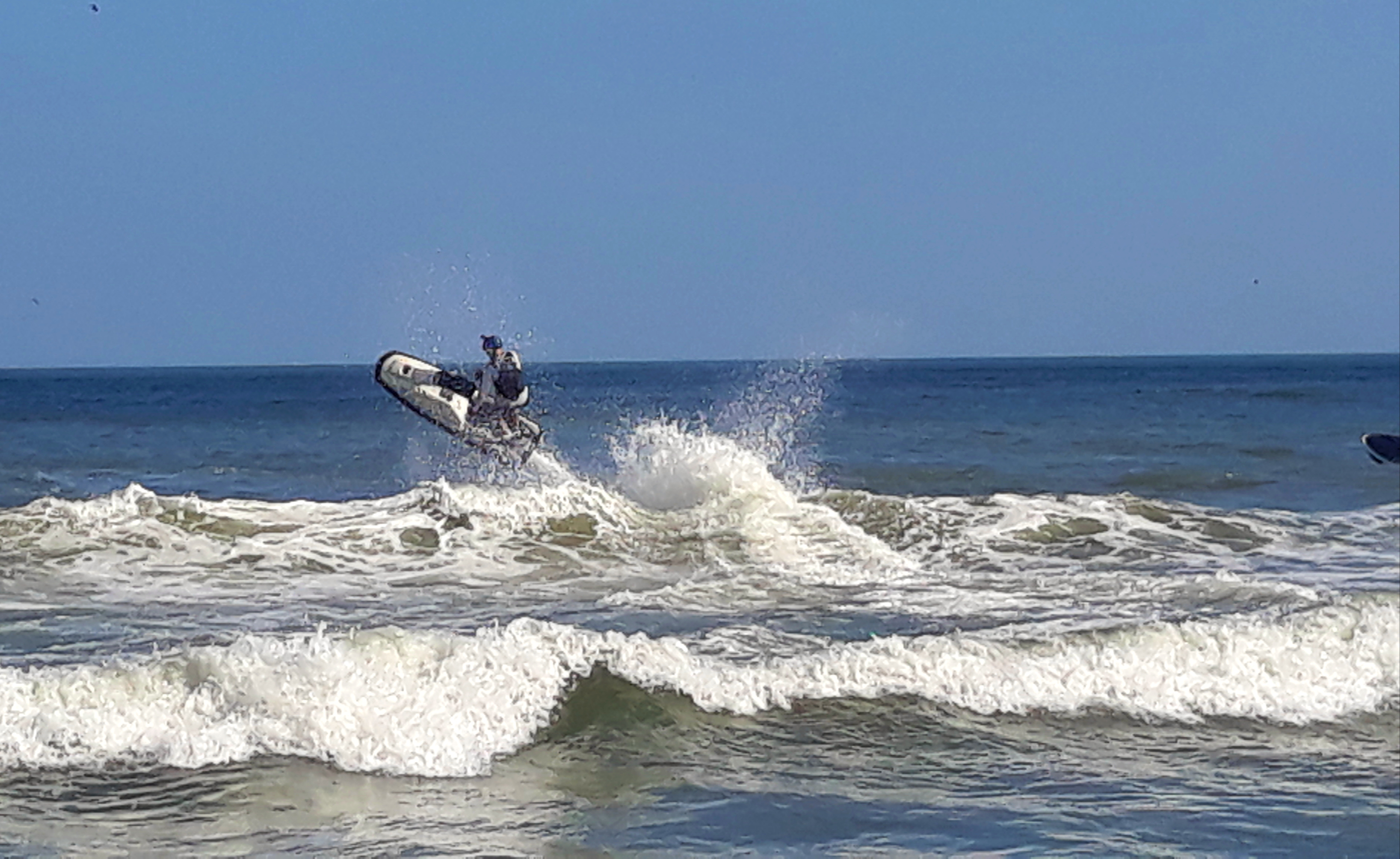 Last year my time in the water was cut short due to a faulty bilge switch. This year, I bought another "waterproof" switch, disassembled it, filled with dielectric grease, then reassembled and glued into its housing. Finally, I coated the switch and its wires in a roofing "tar" and tested before the trip. This worked for a day, but eventually the salt water found a path into the switch and it stopped working.

After that, I wired a regular toggle, applied silicon caulk to the wires, then wrapped it in three layers of plastic bags. Believe it or not, THIS was the arrangement that worked best, allowing the ski to purge itself of seawater each time I submerged it.

Other than that, the ski ran wonderfully. The footholds I'd epoxied into the tray helped me keep my footing & balance in the choppy surf, and the engine rebuild & porting seemed to give the ski a bit more power. Probably most noticeable was the finger throttle - a huge improvement over the thumb lever which hampered my ability to get a strong hold on the bars. 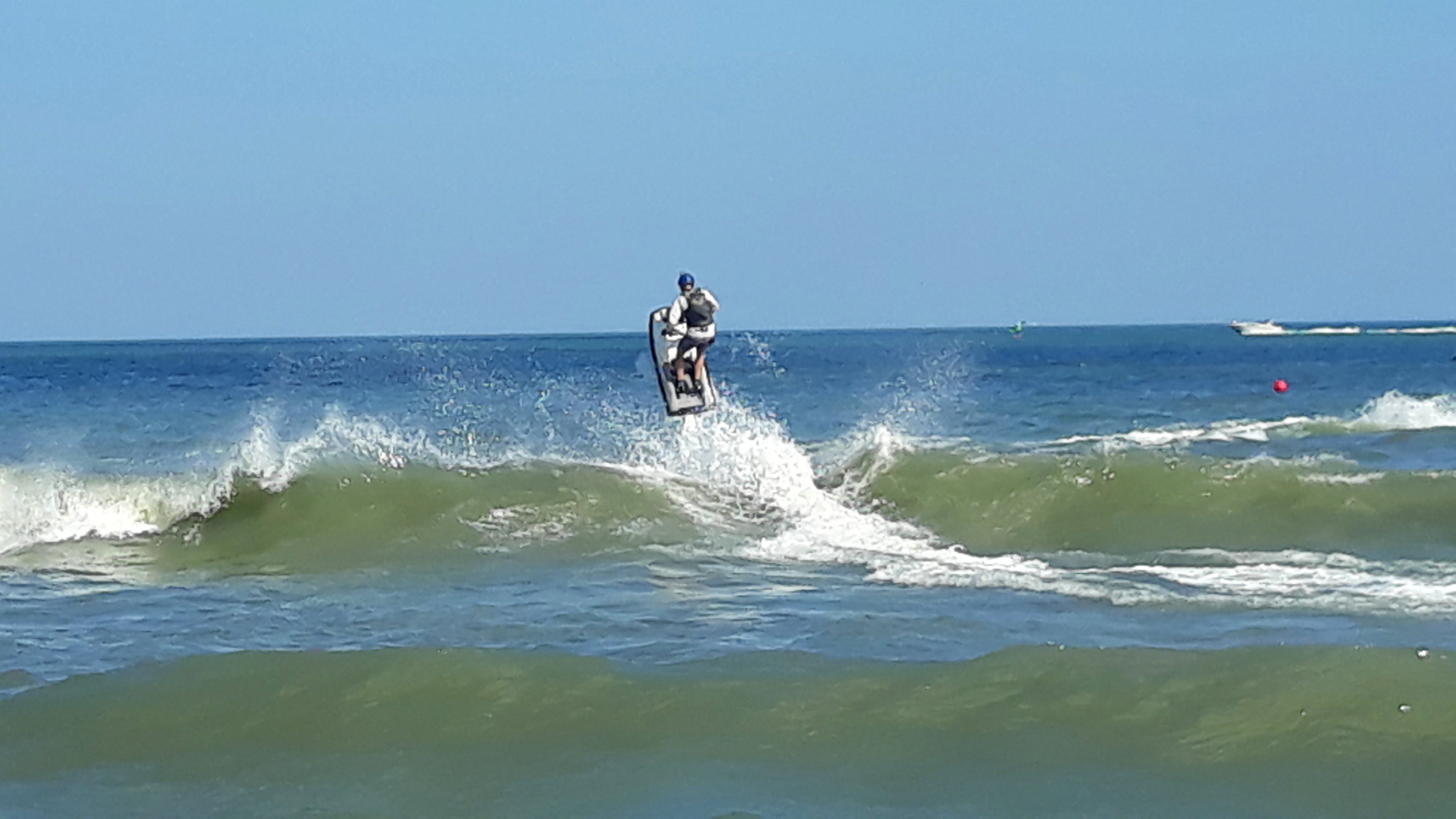 For three days, I watched the other riders rip it up in the ocean, launching my ski a few times each day to ATTEMPT to hang with the more experienced guys. I wasn't throwing any tricks, but I could noticeably see the improvement in my balance each time I'd go out. 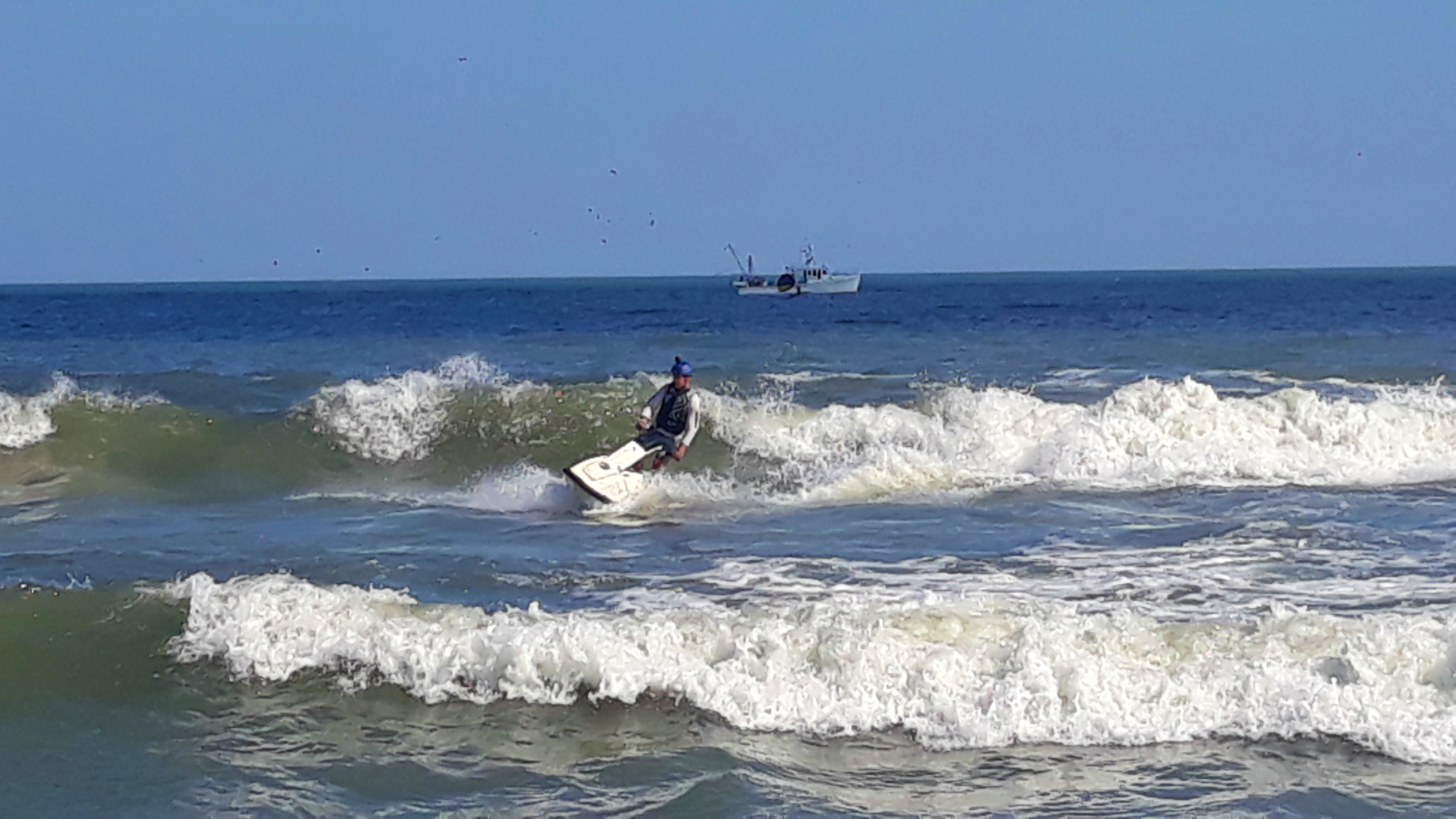 Most importantly was the warm welcome I felt from the more seasoned veterans. Each person I spoke to was happy to share stories of their experiences in the surf. Since I had my wife and four friends joining me, I didn't spend much time with the jet-skiers outside of the daily sessions on the beach, but I'm confident the comaraderie would have extended to the post-ride parties at the Quality Inn which hosted the event. 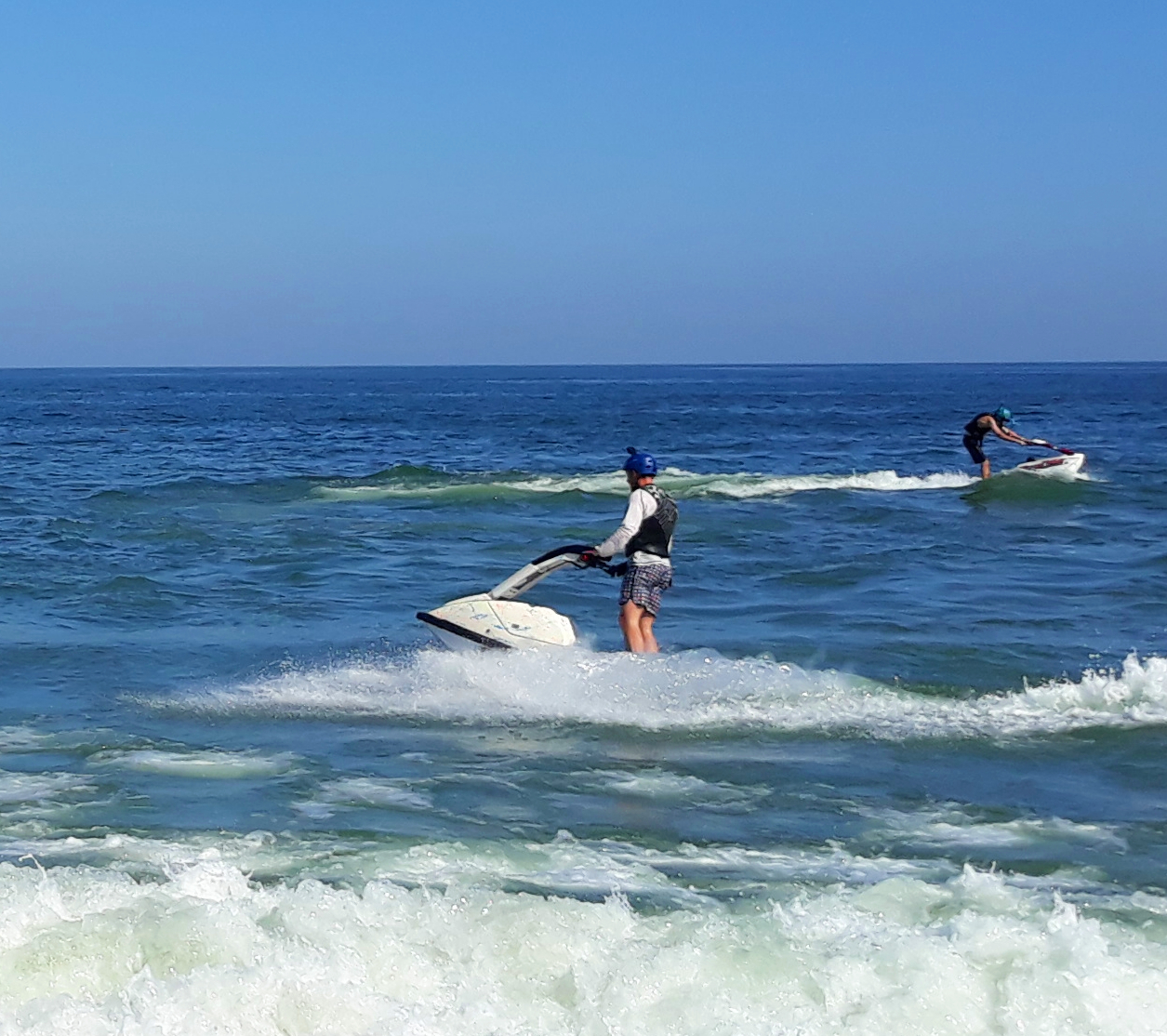 After each day of riding, I used my flush hose to clear the salt water from the engine and hull compartment. Each morning after, the ski would fire right up, so I was happily reassured that the previous day's flush had worked. To say that I was content with the ski's performance was an understatement. We all expect to be subjected to some level of mechanical frustration while thrashing these 2-stroke machines, but my 650sx performed wonderfully without issue! 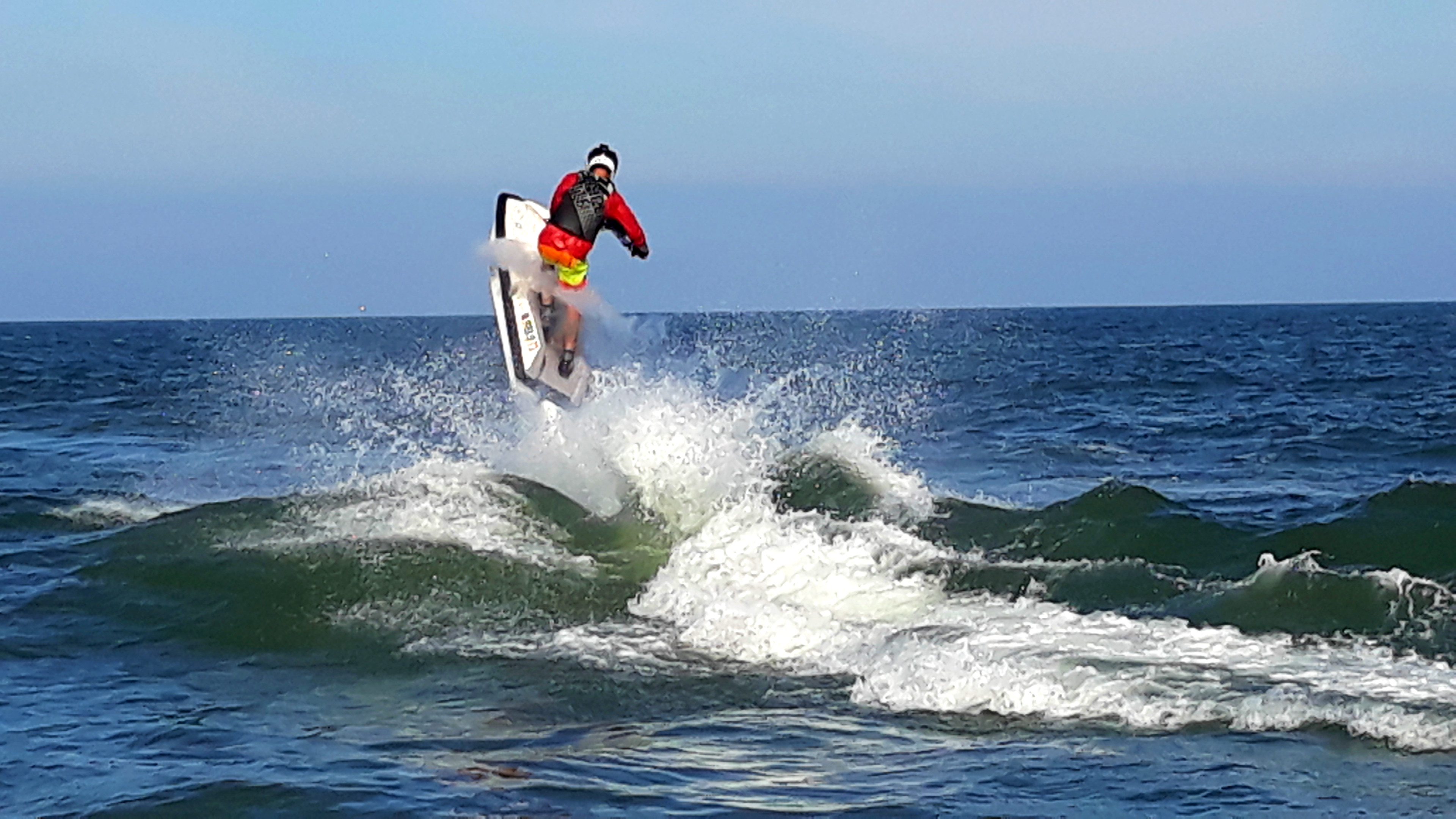 The experience of riding in the surf is intense! Admittedly, my ski is still a but outdated and cumbersome, probably contributing to the fatigue that quickly sets in from holding up my stock handle pole.

Now that I've at least experienced the ride on my ski, I'm going to list it for sale and upgrade to something more current - hopefully a 2005 or newer Yamaha Superjet. 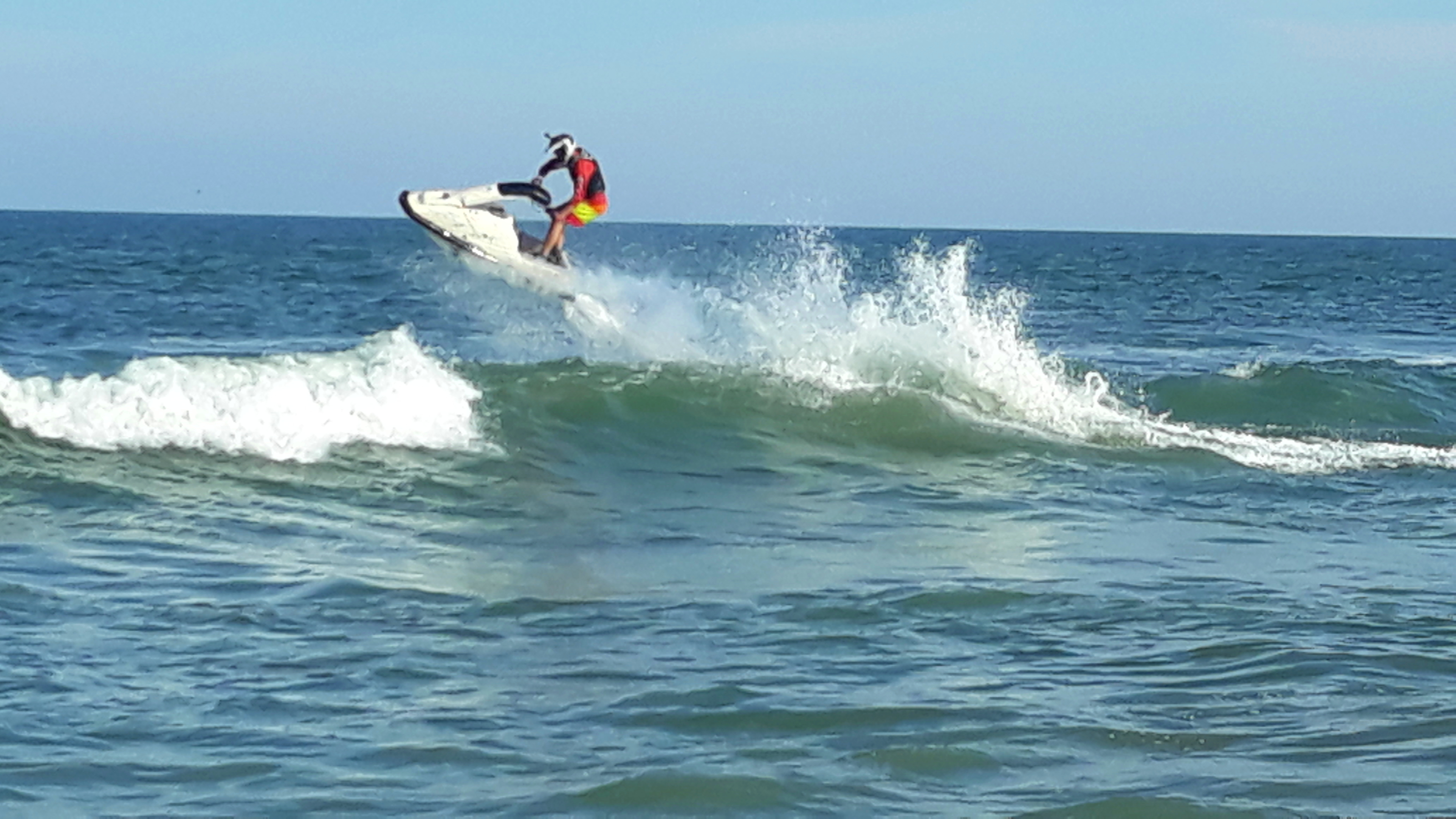 The DRZ's first experience offroad was great! I swapped my spare set of wheels onto the bike and it thumped its way up the trails with ease! 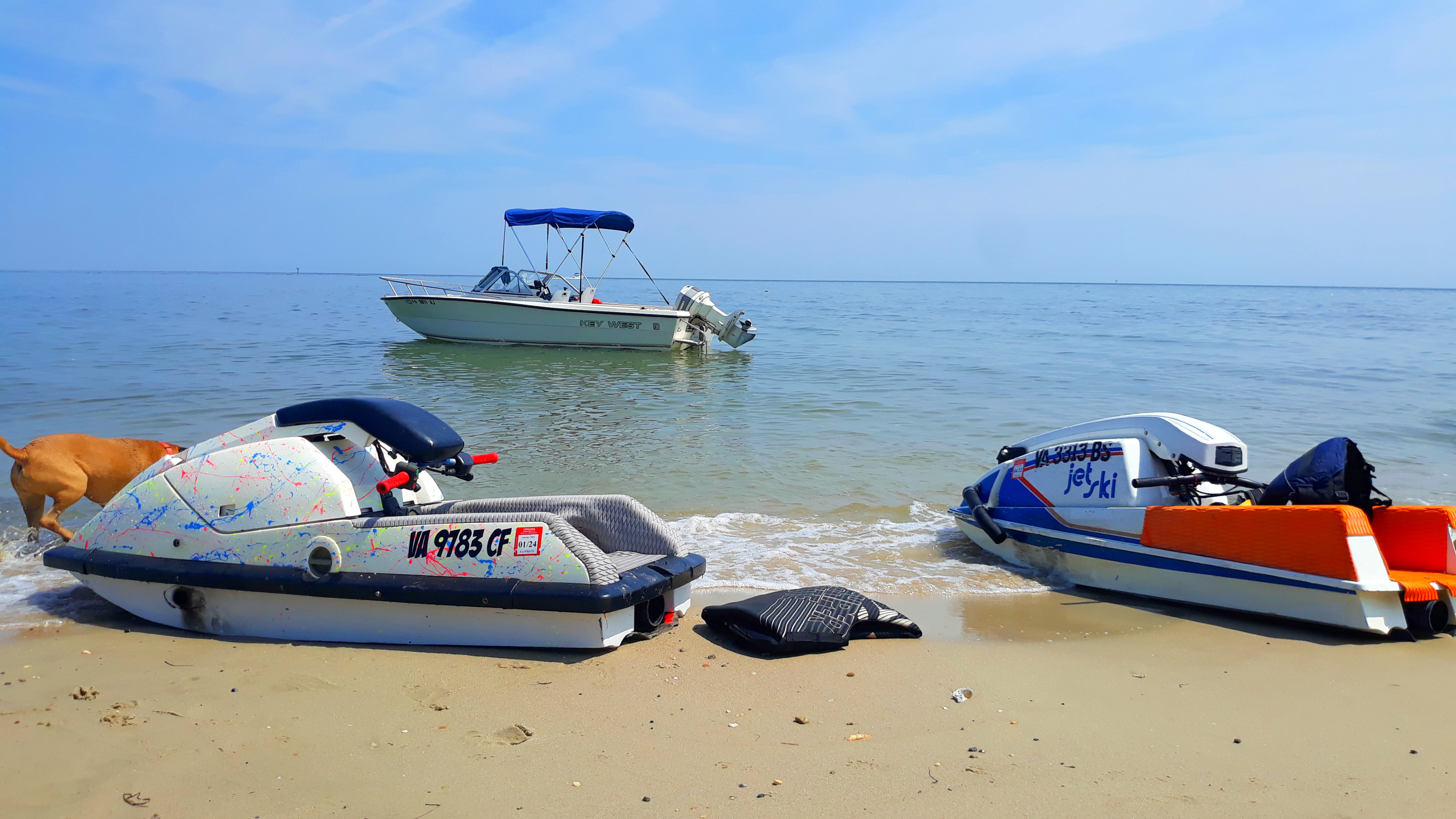 I've been dreaming of a day on the beach with the newly-restored ski for a while now. In fact, the entire time we were at Cape Lookout, I was constantly thinking about how awesome it would be to have the ski on the beach - just waiting to be ridden in the surf.

Finally, the dream became a reality! 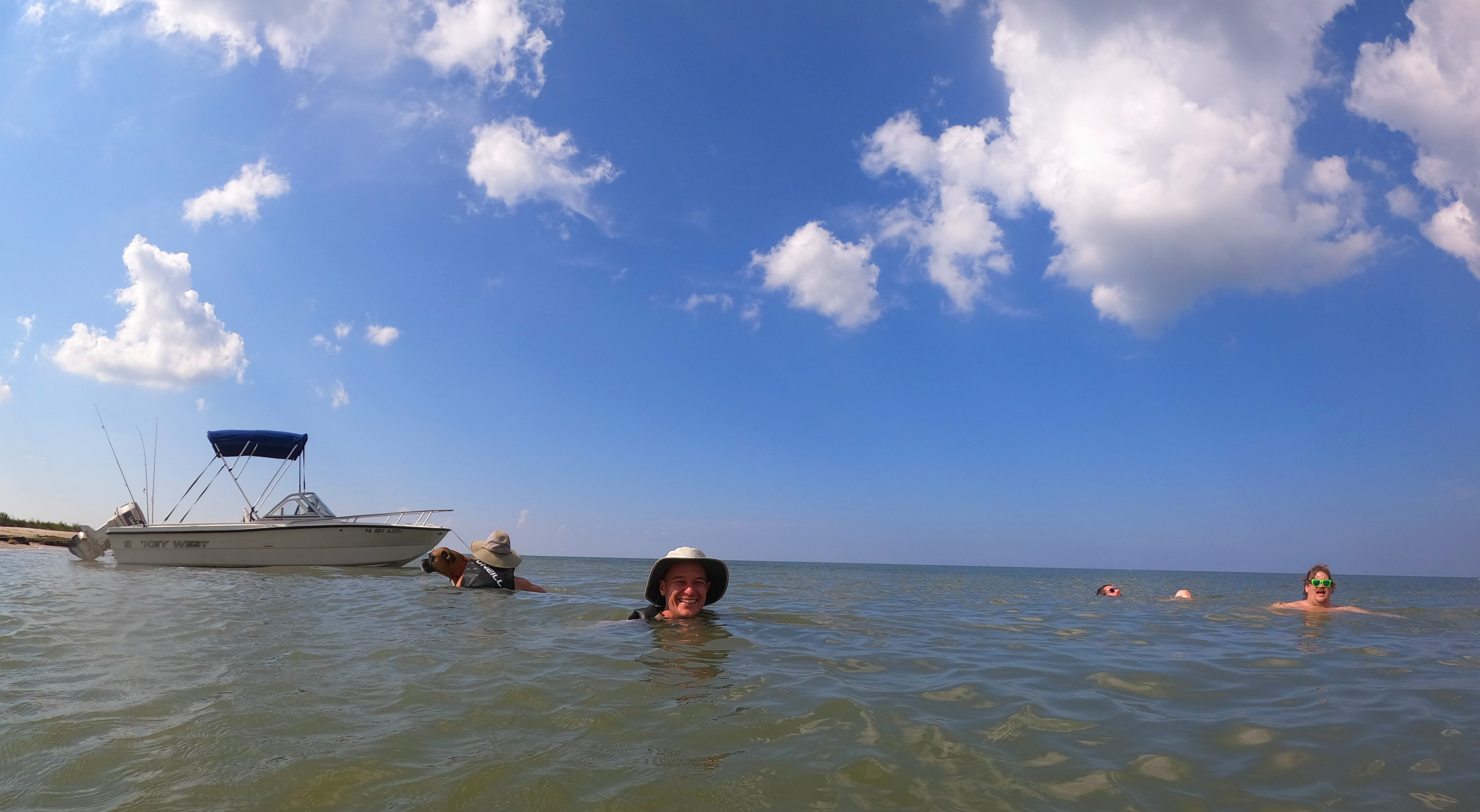 I scoured Google Maps for a boat ramp in close proximity to a beach. The closest that I found was the Fox Hill Boat Ramp in Hampton. Not far from the ramp are Factory Point and Grandview Beach.

Once I'd found these potential destinations, I called the Department of Game & Inland Fisheries to inquire about regulations. I was glad to find out that boats were allowed at Grandview Beach (Factory Point is off-limits due to migratory birds). Also, I was told by a ranger that we could beach our skis on the sand as long as we were mindful of other beachgoers. 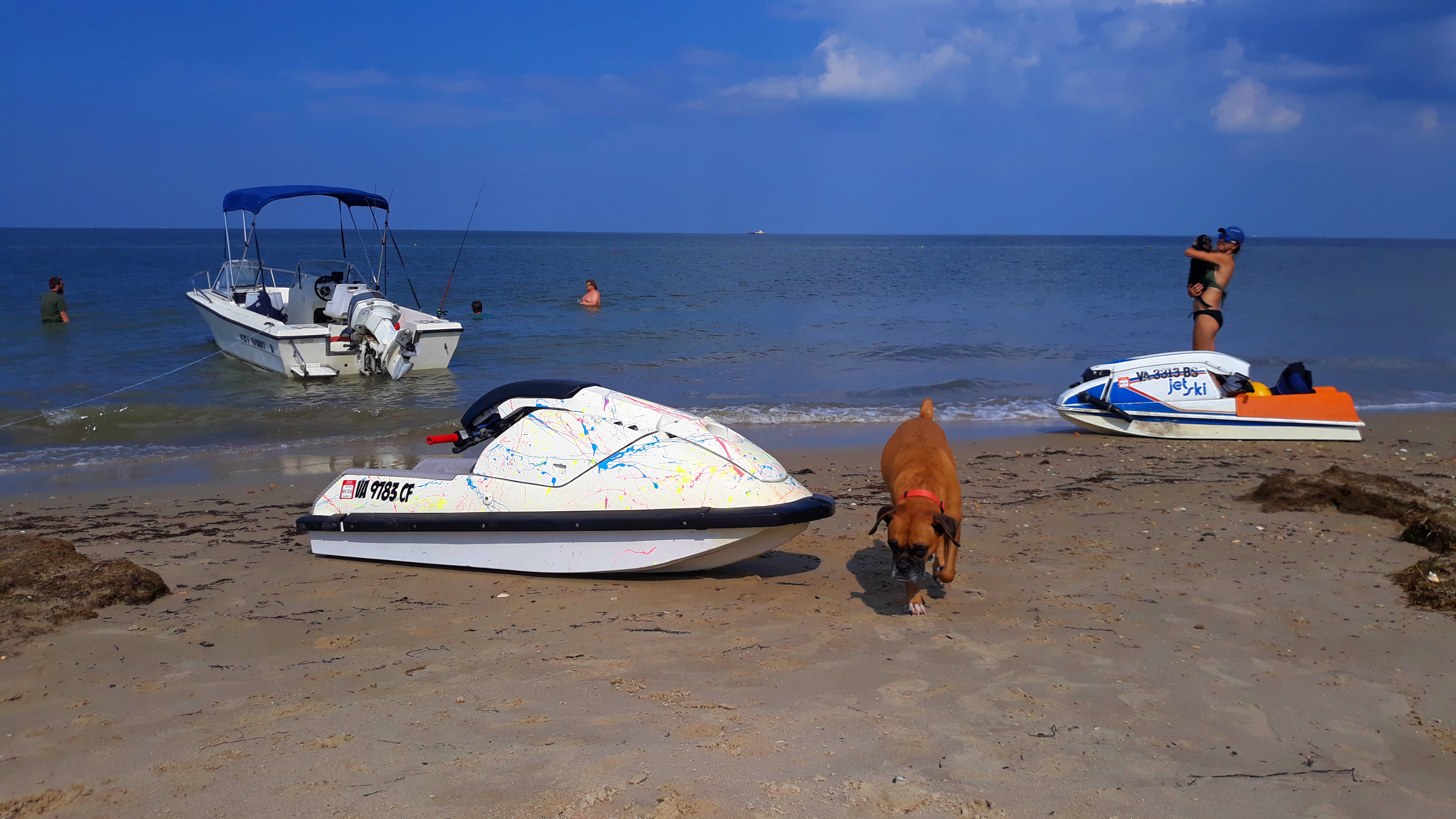 I invited my friend John and his family, who arrived with their boat so we could bring all the beach essentials. 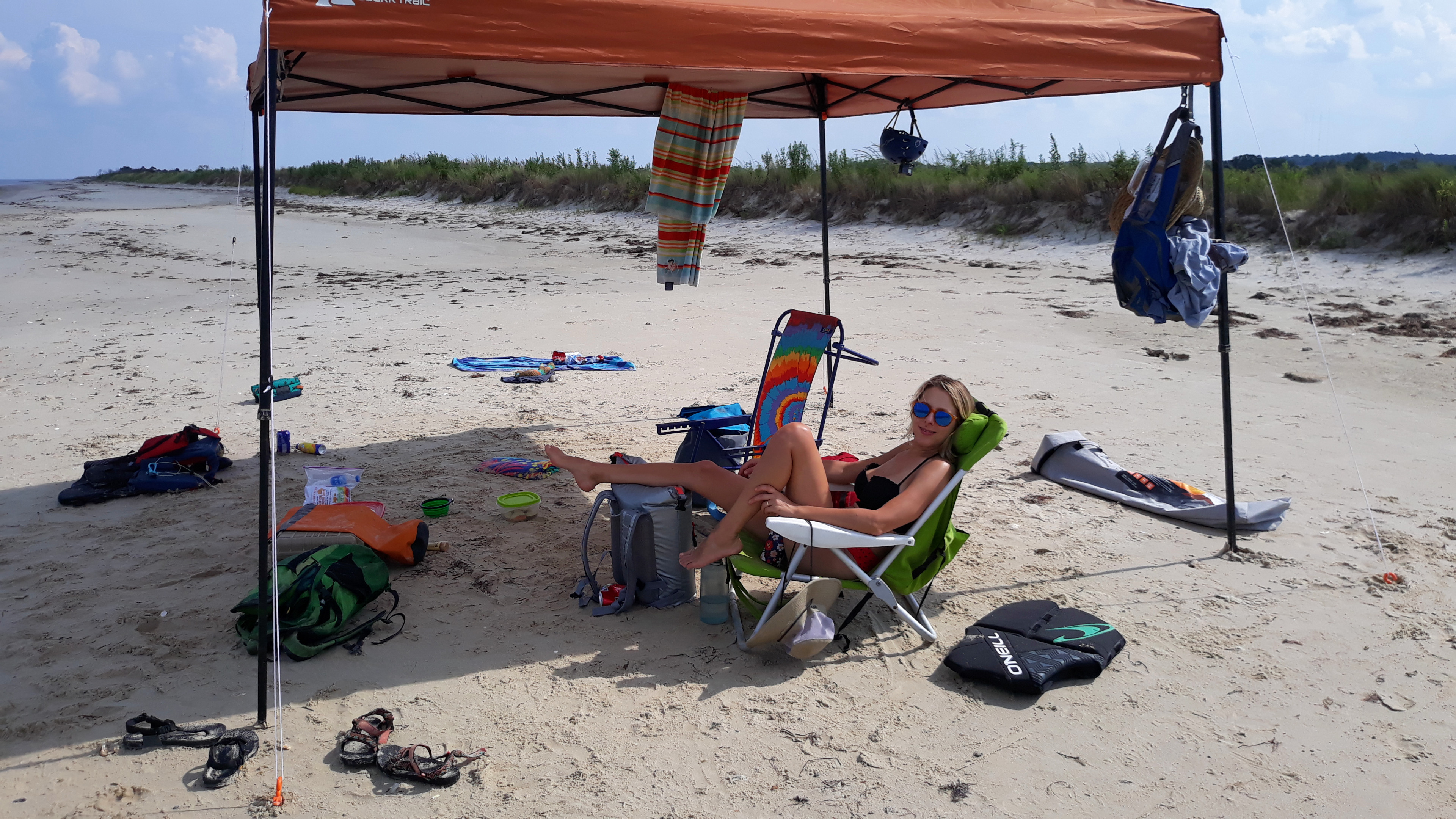 Another friend, Ben, brought his JS440 and the three of us made our way from the boat ramp to the beach, spotting a few dolphins swimming alongside us as we rounded Factory Point.

Once at the beach, we set up our canopy and spent the day playing in the water and making runs on the skis. 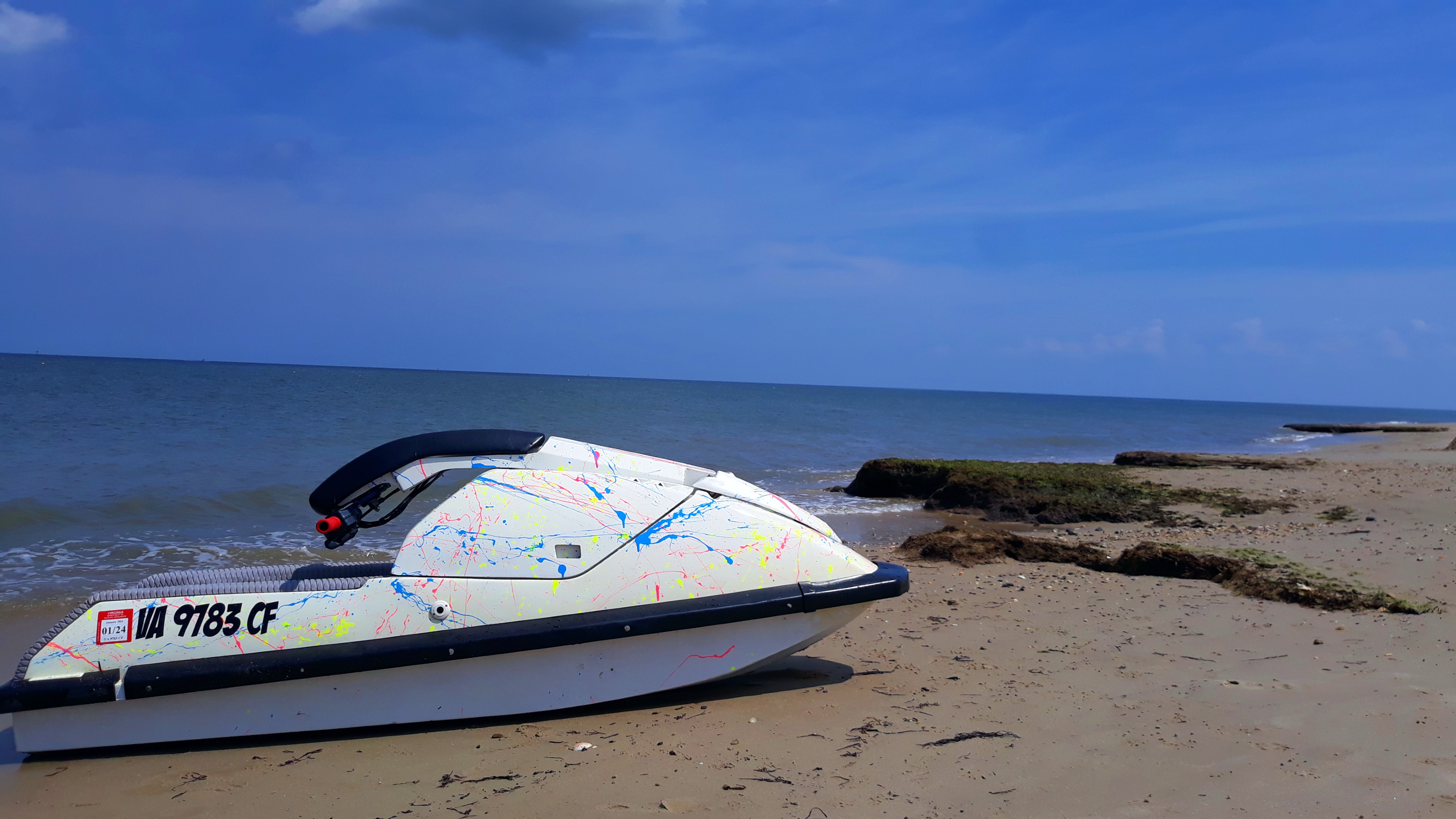 It was a great place to discover. At only about an hour-and-a-half drive, I think we'll be returning for sure! 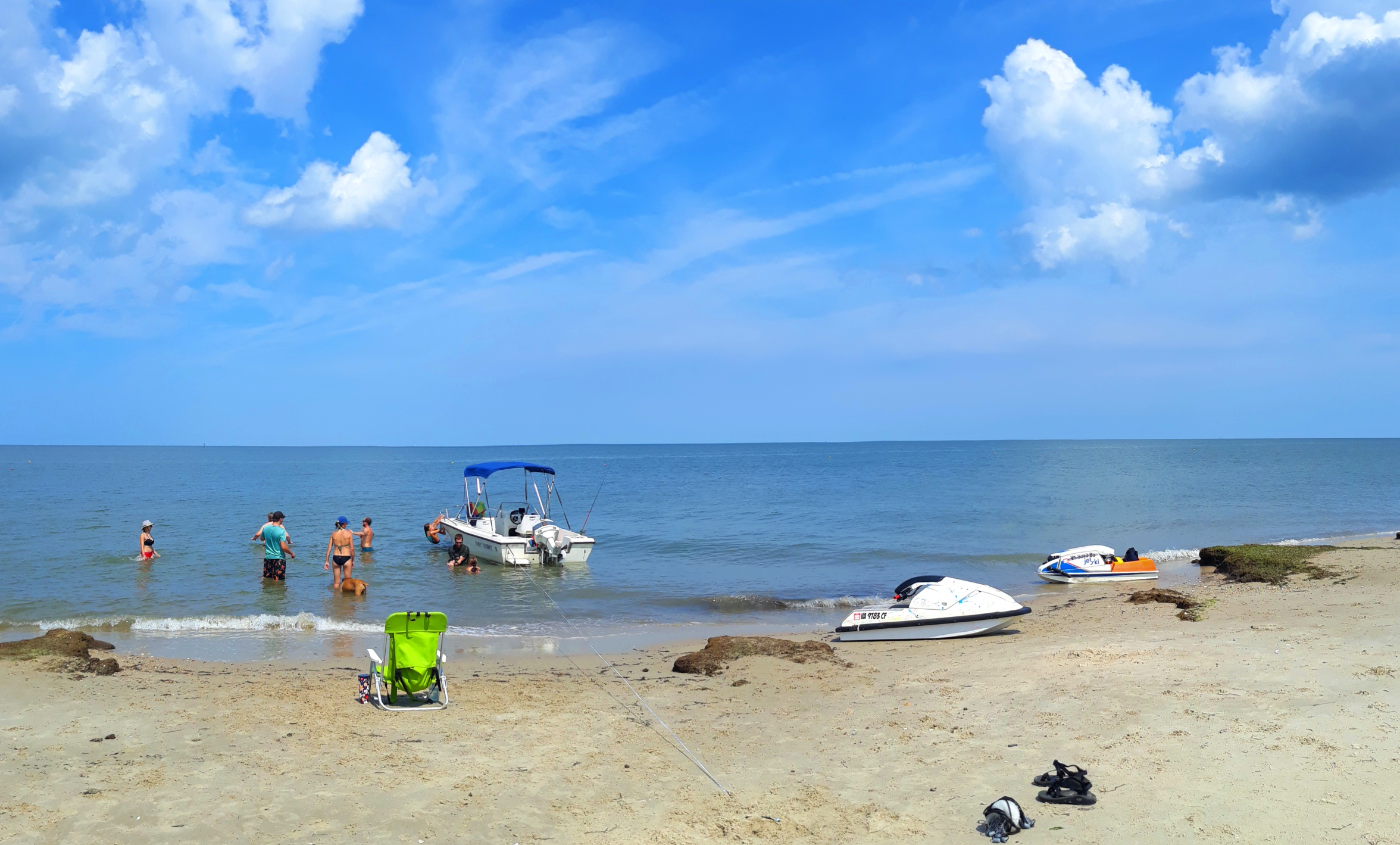 When Rebecca and I decided to rent an AirBnb in the mountains to celebrate our wedding anniversary, the immediate question that came to my mind was "what toys can we bring?" 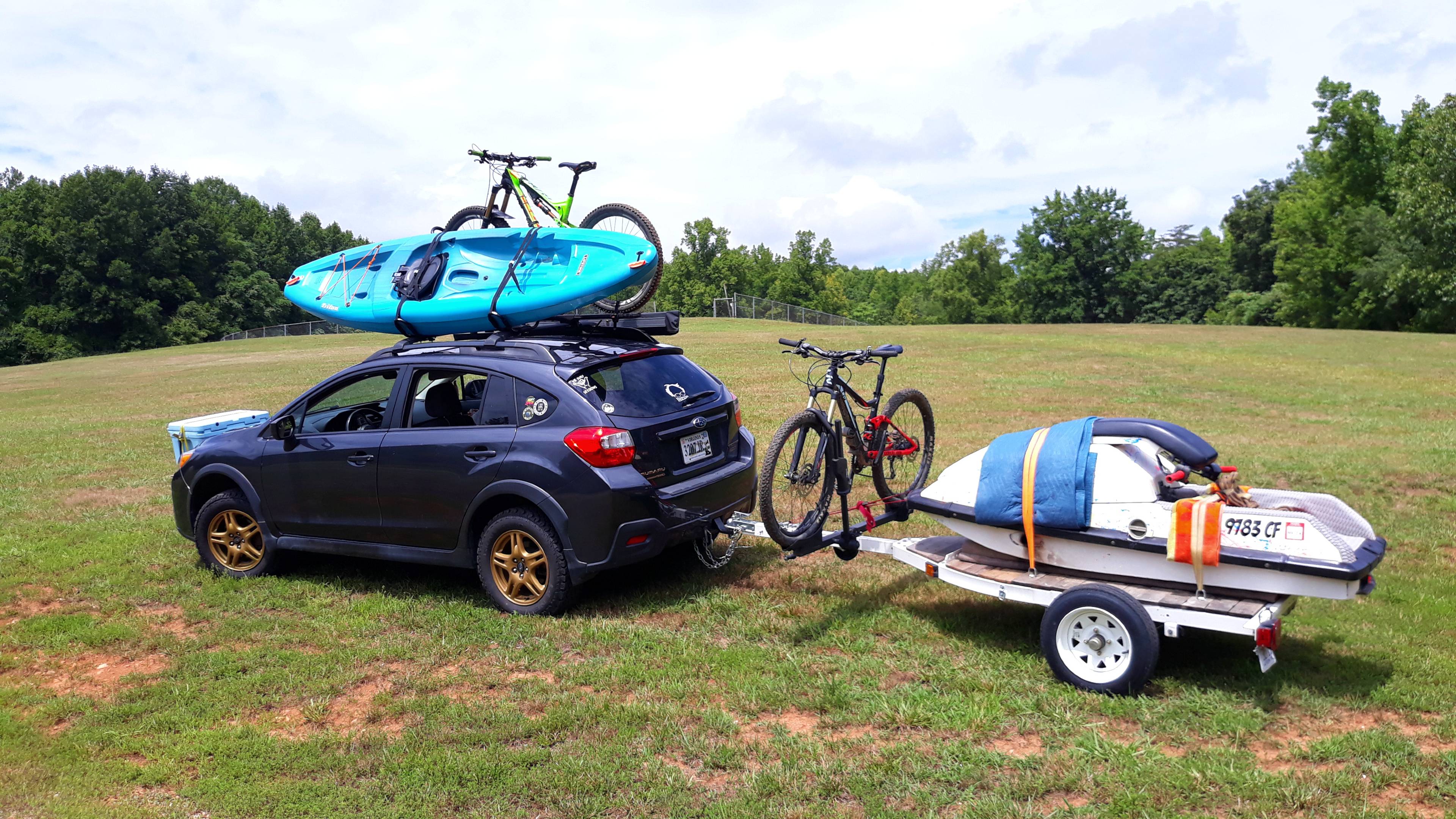 After a bit of deliberation, I decided to pack boats & bikes - splitting the weekend into "on water" and "on land" days. 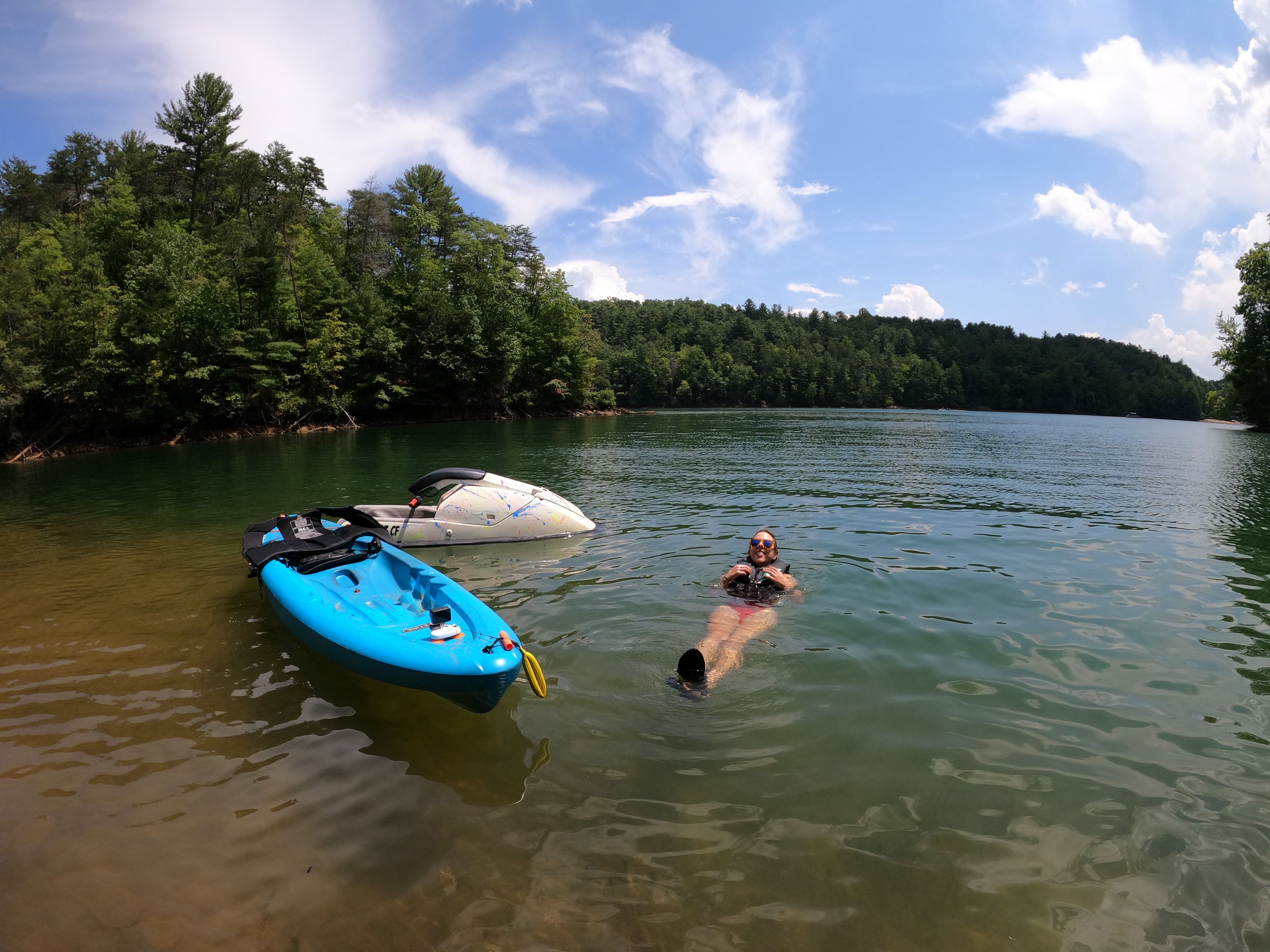 After completing our drive on Friday, we didn't have much time to spare, so we quickly unloaded our gear and drove into Floyd for dinner at The Blind Pig & Lush Lounge, an eclectic speakeasy that was completely worth the short jaunt from our lodging in Stuart, VA.

The next day we headed to Bowens Creek with the standup ski and sit-on-top kayak. I'd just bought the kayak for Rebecca's birthday, so this was our first time using it. Rebecca took to the boat quickly, even with the extra challenge of balancing Lola between her legs while she paddled. 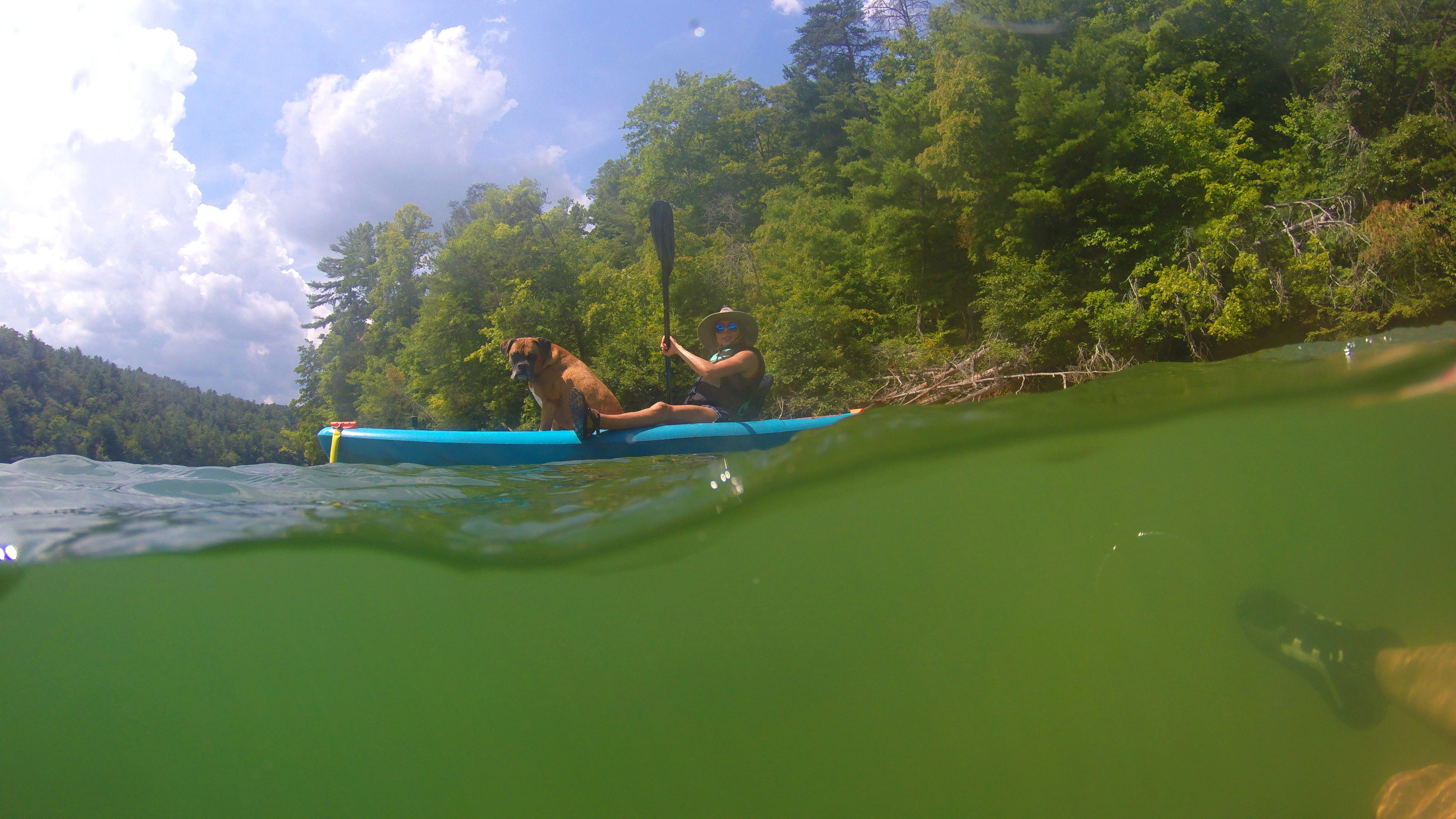 We found a spot in the sun to disembark on the clay shore. From there, we took several trips to explore the coves in the beautiful turquoise waters. 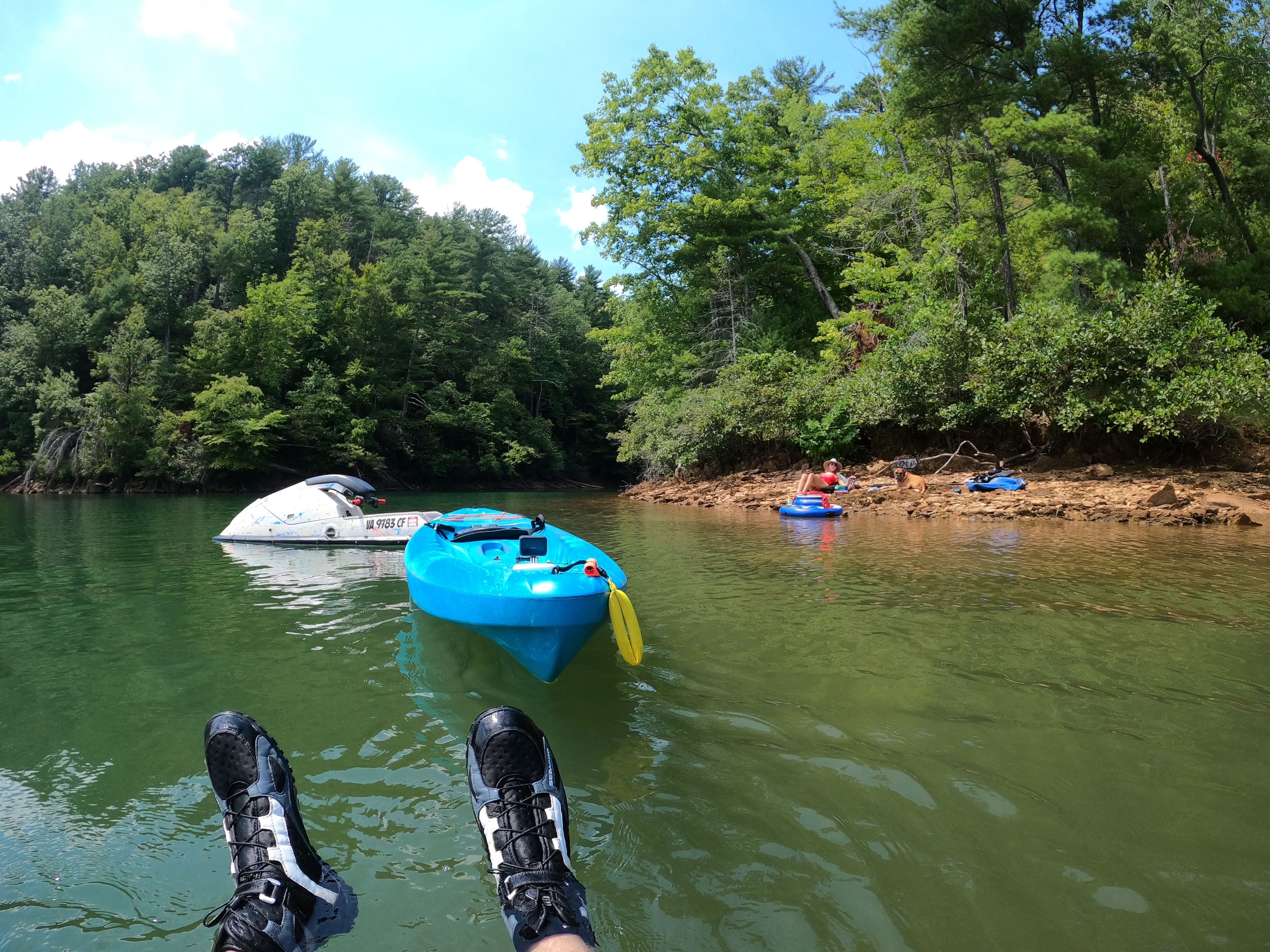 That afternoon, the rain moved in. We got off the water just in time and headed back to the screen porch of our AirBnb to watch the storm move over the mountain range while we sipped drinks and celebrated our day on the water.

On Sunday we packed up and headed to complete the Woolwine Loop on our way out of town. The loop was a great mix of short descents and ascents, over rocky and rooty terrain.

As we were nearing the last of the climbs, Rebecca stopped suddenly. One black bear ran up the hill into the woods while another stood upright, facing her from a distance of about 80 feet. She wisely backed away and we decided to find a reroute to finish out the ride. A short bit of bushwacking helped us shortcut around the bears and in a few minutes we were back at the Crosstrek. With that last bit of excitement, we were happy to have stories to tell as we loaded up and headed home. 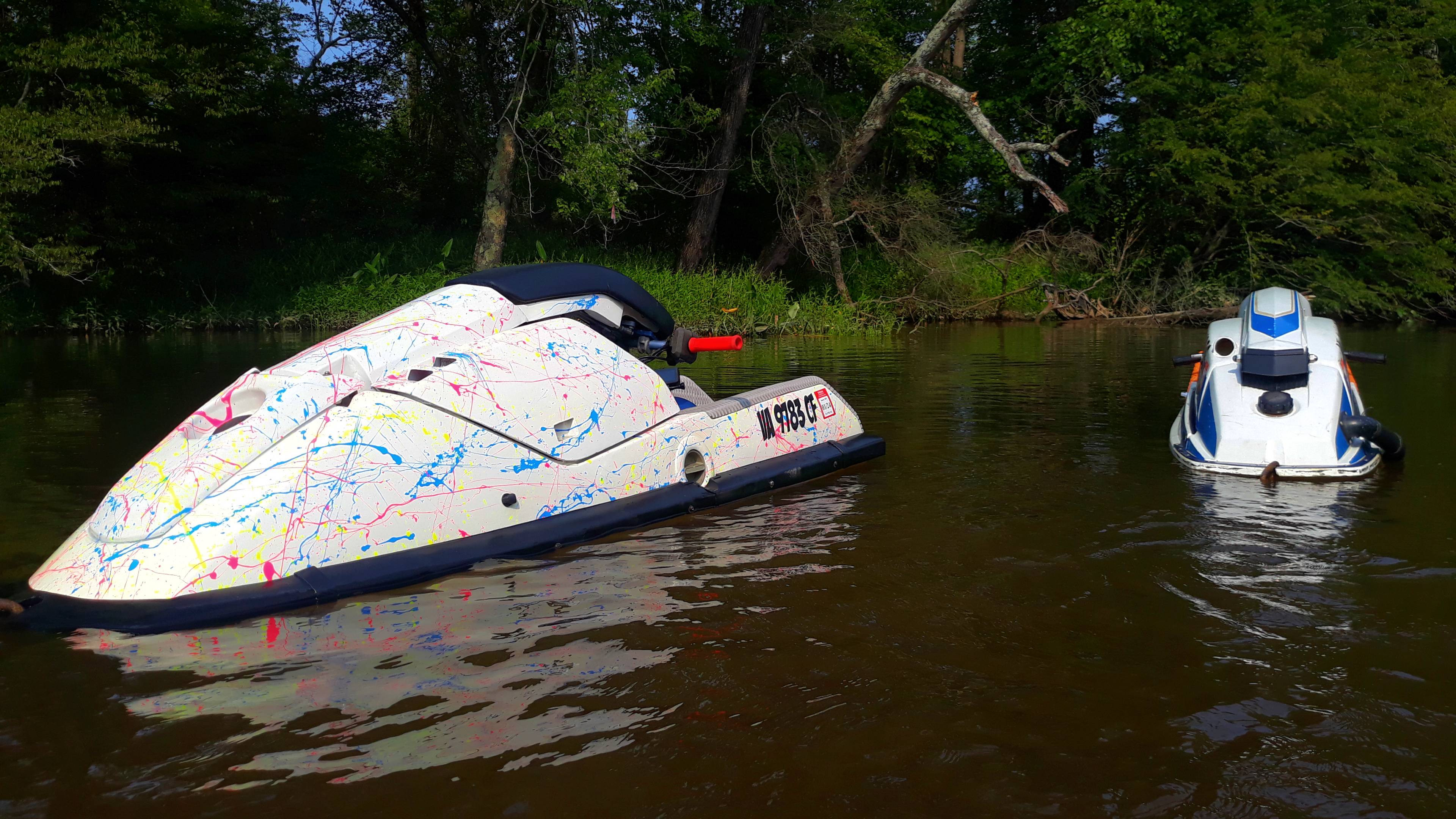 Now that my ski is back together, it's time to RIDE! 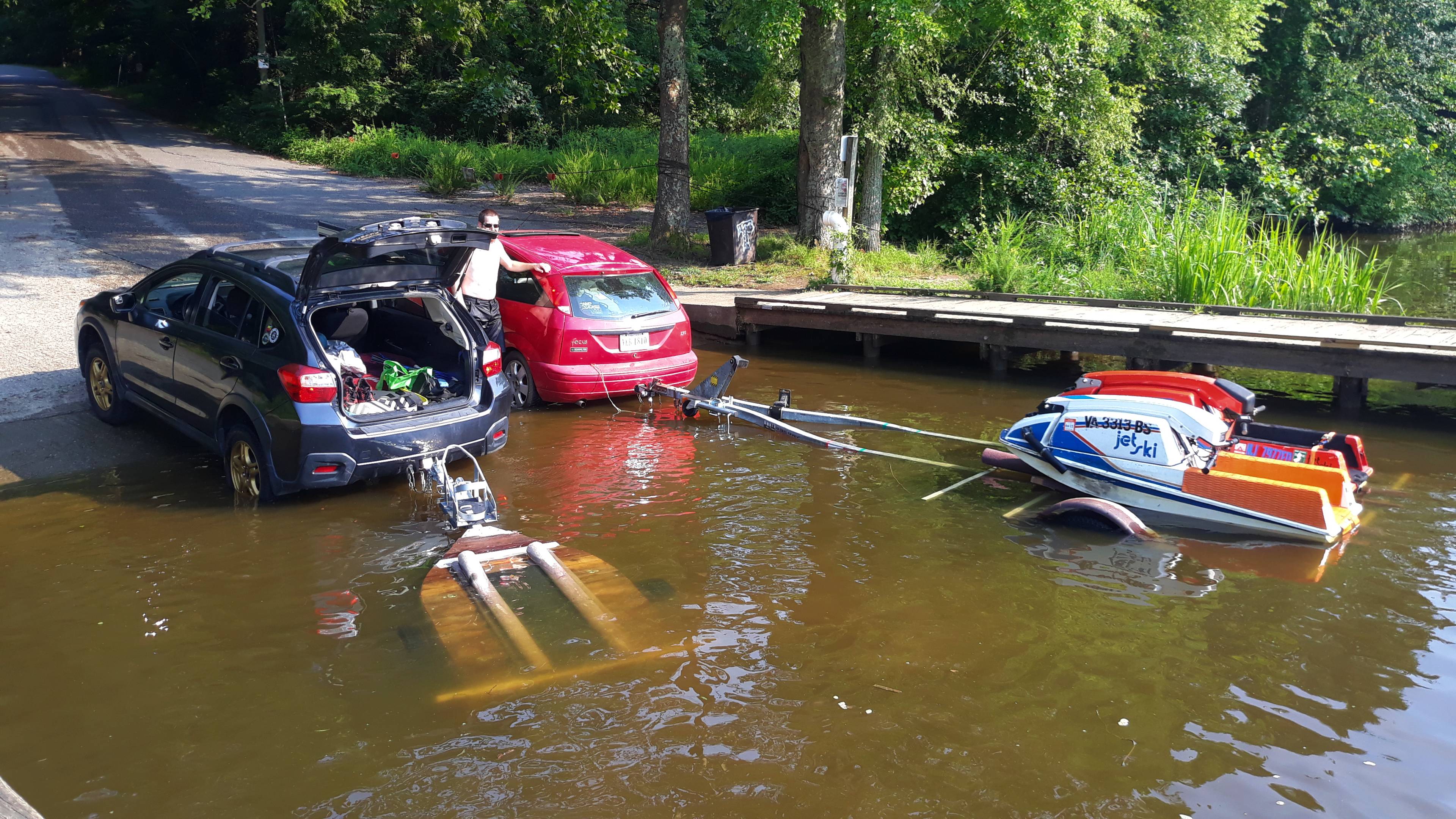 My friend Ben scoped out a great spot to explore on a Friday afternoon - White Bank Park & Boat Ramp in Colonial Heights, VA. It was only about 30 minutes from town and the area was a beautiful setting to relax and get a few runs in. 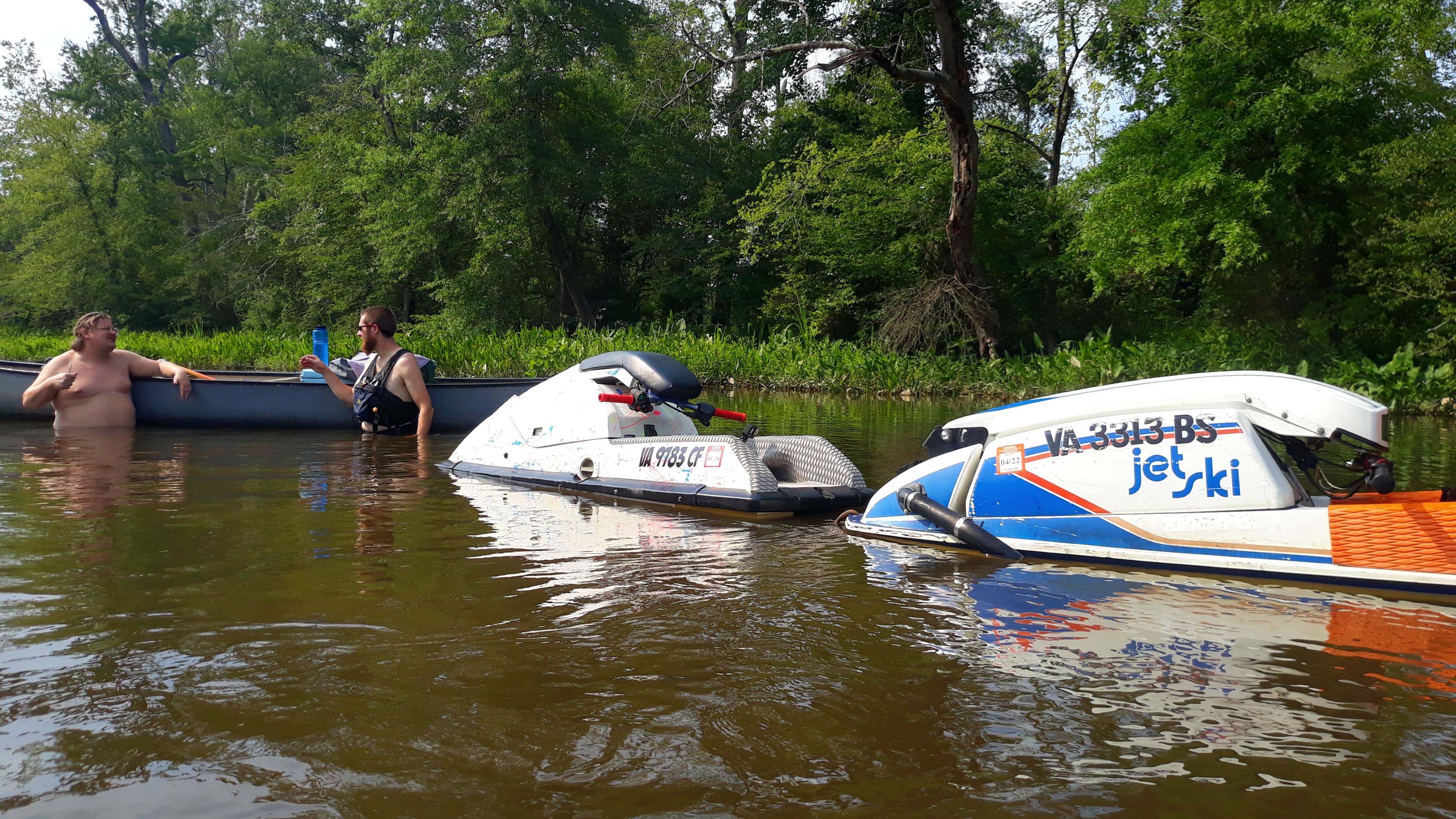 I brought along another friend, James, and my canoe so that we could chill between laps on the skis. 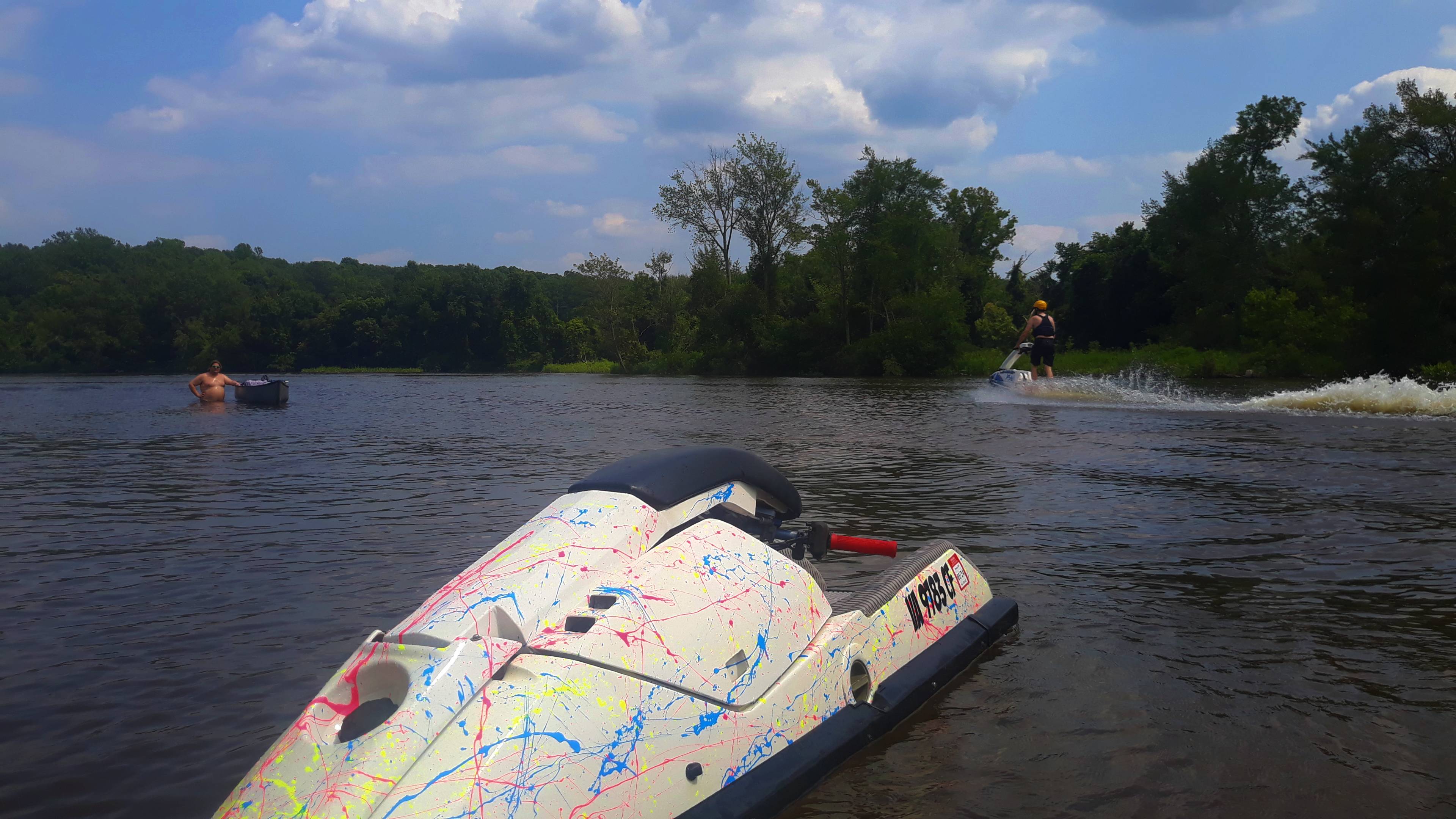 Conditions were perfect - a sandy bottom and waist-high water (even at high tide).

One of the absolute highlights of each summer is our trip to Cape Lookout National Seashore. This year was especially unique, since a third couple joined us in their Crosstrek. The extra vehicle and awning created a great home base for our days on the beach. 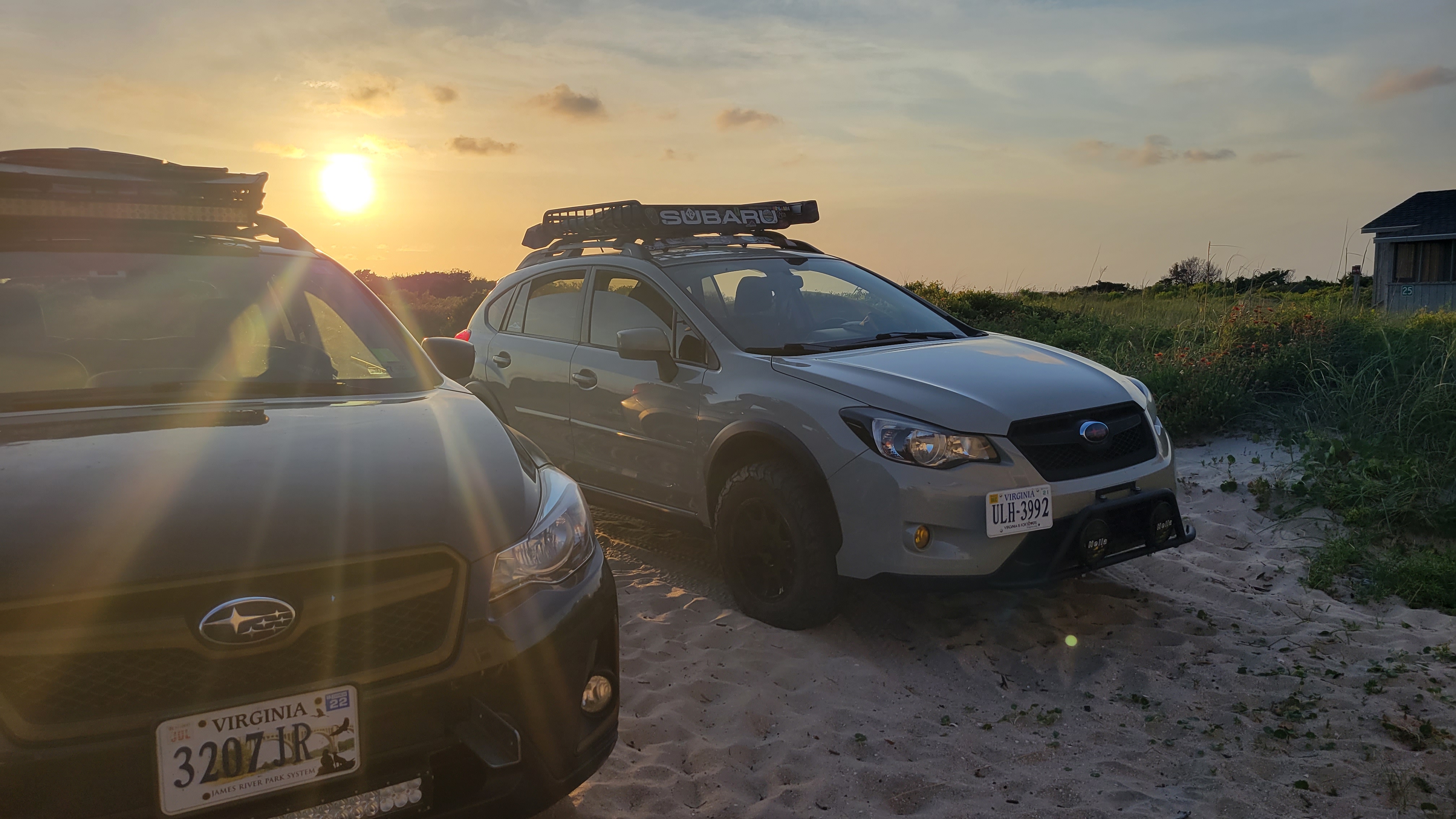 A couple years ago we were surprised by Caribbean blue waters. Luckily, we returned to find the same beautiful colors this year!